Ariel Resnikoff: from the “yinglossia” series, a work in progress 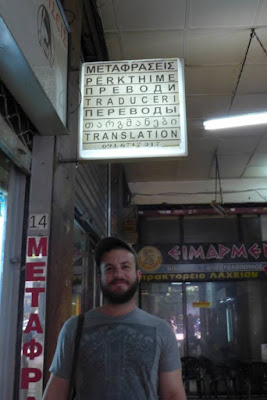 [AUTHOR'S NOTE.  I arrived at the present work thru a practice of translingual-poetic (translational) deformance across/​between multiple code-switching dialects. My compositional method traverses by (mis)translation in/to​ Yiddish-, Hebrew-, Aramaic- & Akkadian-English adapted​ sonic/semantic properties in​ grammar, syntax & lexicon, taking English as its temporary “host” while performing perpetual inflectional slippages—interlingual punning & fusion-slangs,​ as much as the host can absorb.
The dybbuk (Yiddish: spirit-possessor), which my Jewish-Ashkenazi ancestors believed to inhabit the body of the wild stutterer, mad person, heretic or “akher” [lit. other],​ became the peripheral focus​ of this poetry. I began to imagine the “odd”  transgressional​ practices​ of that other(ed) marginal antinomian ancestor —the “possessed”— and to consider the ways in which this “possession” by language might manifest in my own​ “odd” practices, which so mark me as poet, translator and jew. I use the word “odd” here in deliberate echo of the terms against which Sabbatean stigma was transcribed in ​17th-century Palestine: “for the odd practices of a false messiah.​”--A.R.]


y i n g l o s s i a “ f i r s t s p e e c h ”
praise god! thanks & pray. recite the 18 benedictions. vo den (cut-off [lit: what else])? no sweat. god [lit. the name] respects the humble somebody -- does he? berates the evil-ones (may they choke on their tongues [lit. languages]). the real article is a bargain for hire. the chew-among-chews. for rent or (re)lease. it pleases me, see? my heart told me so, see? i predicted it, see? likewise: keep it moving! don't bother me [lit. don’t throw a hook around my nose]! **a stutterer was seen as a scatterbrain, confuser, & somehow also a conniver, twister, self-promoter, not to be trusted [lit. jew]. human dung was attributed to [lit. the inferior merchandise]   now we talk excessively or not at all. a groan, maybe, even, a disparaging sigh…cld be…lies on the square & still talking non-sense
y i n g l o s s i a “ f r i e n d l y f a c e ”
friendly face. a familiar face.
like a hot bath. like a bowl of chopped meat.
stop banging on my head [lit. bargaining w/ my sanity]
the gargling solution shld be
fresh breath? o, that it shld come true!  who bringeth forth bread
from the earth, etc.
to the common people, for a bargain say, not only to do business
but for heartache, see? sweetheart (singing) my heart’s love
is a pit in the earth . . .
listen: you can shake-stammer
in impending fire
from stuffed cabbage to stuffed cabbage to
stuffed (holebshes/holishkes/holubtshe) depending on
from-where.
& so I made a mistake. so the words abrade. so what?
i’ve been called worse than debauchee
many times before, a caine-raiser
carouser, mad man, mongrel, kyke --
y i n g l o s s i a “ m i n c h a ”
for Anne Tardos
in praise & submission to a baby-son [yiddishism (derisive)] -- let us prepare ​the tools for extraction [lit. from tongues]. if the fever is of a jewish head -- is it a shaygets luck?  There's no evil eye, either way, as they say (tu-tu), the canary keep away. single men of marriageable age [lit. little birds] crippled into misfits for a spoiled lap of milk, narrowly achieved [lit. hardly lived to see] the transformation of soars into sacrifice (slang [lit. false-messianism]). raw groats (a mess-up [lit. mix-up of]) & cooked groats w/ broad noodles at a kosher boarding-house-cafeteria in the far-reaches of the Bronx [lit. a lively Russian dance, usually to sexual cause (ie. of ‘blind mixing’)]. an amulet [lit. charm, (from german, "kind-bet-tzettel")] worn at birth, containing psalm 121: di nomen fun melokhim [lit. names of angels] -- envision god in labor & after, old & young, eating plates of stuffed derma (in flour & onion, salt, feffer & shmaltz, (to keep them in skins) -- the ticklish little prigs (technically, talkative little jews [lit. fruitless idle questions)]: not in "reality," so to say [lit. "as if it were" (pronounced ver)], round dumplings made of groat-meal cooked-up in pork-belly stew & tied at the corners in ‘bakers handkerchiefs.’ dumplings filled w/ potatoes & livers, kidneys & barley at a kosher boarding-house-cafeteria on grand concourse: a petulant excitability by a gad-about gang of jews gathers about --“he had been perfect [lit. legitimate] before the cross-eyed sickness took!” first in small pockets of dough filled w/ meat & curd-cheese, the magic-worker, trickster, phony casper milquetoast corrupts the root-canals of the pure jewish jaw. a virus of the tongue & teeth [lit. cheek & mouth]. how does it infect?

**in force of false laughter & aguish [lit. idling], the loafer lox-addict stutterer stumbles out of the afternoon prayer-hall, wreathing in false thanks & praise: “may we fan forever the shekhina embers”! [lit. blessed is the vessel as it breaks]
y i n g l o s s i a “ b l e s s e d a r e w e ”
go away! go hump w/ the whales (peddle yr fish
elsewhere [lit. whistle at a leviathan]).
go to hell! [lit. may you choke on yr tongue] shit in the ocean.
spill yr guts.
spill yr guts against the city hall.
spill yr guts against the synagogue [lit. house-of-entry]
that you shd threaten the "holy geese" upon entering & don't
(& don't frighten me [lit. you little non-native jew of
galicia])!
someone hollers: go frig yrself  . . .
the same to you! [hebraism, lit. big deal… (derisive)]
quite well, huh? tho it doesn't work-out the way we planned
there is no "complete man"
to bribe, see? blessed are we, w/ children & all (in fractured
English [lit. utter
misery]) we are chopped-in w/ the herring & vodka [lit. minced]

y i n g l o s s i a “ c o m m e n s e n s e ”
what a..! what kind of a..! what’s it matter to you, huh? now don’t get excited [lit. burst into flame]. it stinks—what’r you talking? smack smack (gently said) wd you keep quiet (shouted), quiet, I said, shutup!! there’s the professional (professorial) type who makes a living from it, gathering the pious sheep, berating the irreligious (who “flout” the sacred law. “beautiful as the seven worlds,” (belles lettres, & w/ a hearty laugh [lit. half-sarcastically]). the wig at the wedding she wore ever after (a watchword greeting, beadle at the shtibl quoting old policeman’s slang: “it had a been a brothel whorehouse (before) mix of  wool & linen !” now you oughta be ashamed of yrself [lit. to the bottom of yr throat]. the prettier ones they bury [lit. this one is an ugly one].  & gather pleasure, the little nothings for a “messenger drunkard” -- non-jewish [lit. impious or wild one]. if to skin one: a hag-mare worthless one [lit. mischievous child]. an apoplectic wreck. where the customer is king [Americanism], a snake can also be a shrew  clumsy bungler, drag, poor luckless sponger, butter-fingered shmock

so now, get rid of it:
alas for alack, woe unto whom?
either too much or too little [lit. a wallop or a toot]
“dear me!” (imitatingly —parvenu!
cut it short [lit. w/out intro(duction)]
conceited & peevish
sulky & stuffed in a puffy shirt
tired-out
& sputtered as confused
little pups [lit. overly made-up]
“the rich are too stuffed-up
to photograph [lit. stuffed in dead birds]
& drunk
me bothersome hanger-on
cursing in
disorderly
survival.


good for nothing -- worth nothing -- starved [lit. dead hungry] day-to-day contrary to the dietary laws -- forbidden foods, impure or unprepared [lit. improvisatory] (applied also to the Sabbatean writings) in the posterior rectum [lit. buttocks-ass, a backward variant on toches] or “house of worship”. the pashkeviln [lit. wheat-paste posters] coating the study hall’s walls: THE JEW WHO DOES NOT ABIDE BY THE JEWISH LAW IS AN IMPURE BONE. r e a d i t & s e e. ( t h e ) evil inclinations [lit. those who crave pig’s feed] are no-thing but an-other ratty snot rag [yiddishism, sarcastically], decrepit worn out no-body. said some-body to no-body “it’d be better to fornicate w/ one-self than to birth such a body.” said  a bum ne’er-do-well faker I was -- mistaken for a petty-Paul & overdressed in wretched rags wandering. from a distant foreign words melted into a mouth, then confusion, absent-minded wild ecstatic repetition: not the one you were expecting, but like a sweet carrot pie [slang, lit. fuss over nothing] in disgrace & humiliation hang the words on tho unwanted, for better or worse. “do me a favor & don’t do me any favors !” the confusion agitation roister bositerer is not just an ornamental swan but at the fringes of language hanging-on; & its costly dear, too much, for such & such [lit. bodily soars]
Posted by Jerome Rothenberg at 5:03 AM