Rae Armantrout: Four Poems from ENTANGLEMENTS, with a note by the author 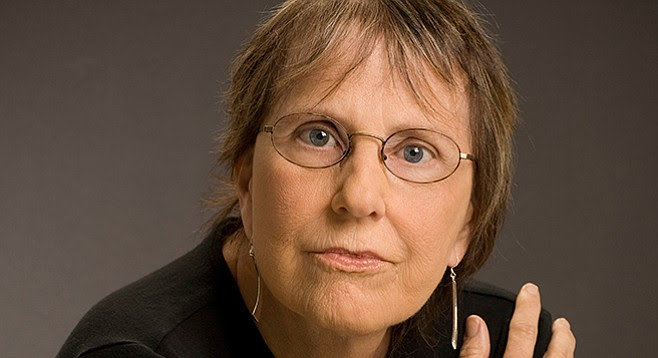 [The poems, below, appeared two years ago in Armantrout’s small book Entanglements, published by Wesleyan University Press and still readily available.  The author’s note that follows was written specifically for Poems and Poetics, as an opening and guide to her remarkable and always mind-bending “physics-inspired writing.” (J.R.)]

to minimize the area
that is the product
of their length
and their duration in time.

into the contracting
light

How far will you get?

You’ll be far ahead
and distracted.

I’ll be running to catch up.

I’ll know you
by your willingness.

that what’s continual
is automatic

That we are composed
of dimensionless points

which nonetheless exist
in space,

which is a mapping
of dimensions.

The pundit says
the candidates’s speech
hit
“all the right points,”

hit “fed-up” but “not bitter,”
hit “not hearkening back.”

Light strikes our eyes
and we say, “Look there!”


Why is it that
for it

to be in-
finitely large

is terrific,
but to be

The thought
of a smaller

bit inside
each bit

has symmetry
going on

and on
about it.

Then there’s our model
in which

the fundamentals
are sound,

So that nothing
rhymes with much–

or starts to
and thinks better of it.

Ending with “as if”

author’s note.  This set was inspired by reading physics. Sometimes I remember my sources; often I don’t. I know I wrote “Running” while reading The Elegant Universe by Brian Greene. In these poems generally I try to broaden the context and deepen the emotional register beyond what was given in the source texts. For instance, the first section of “Running” is drawn primarily from Greene’s book. I remember being puzzled by the idea that subatomic strings would somehow make an effort (I realize that word was metaphorical from the get-go) to “minimize” the space-time they occupy. It sounded as if they would have liked to disappear. It sounded uncomfortable. So I tried substituting “thrash” for “vibrate.” What happens to our picture then?  In the second part, I took another look and decided that “minimizing” was like contracting—which could be seen as orgasmic, pleasurable instead of painful.  I guess you could say that the third section merges the impulses of the previous two. In it, I imagine pursuing a beloved into the contracting tunnel of light supposedly experienced by the dying. In the three sections of this poem.  I’m applying different imaginative lenses to the same physical theory. This is typical of what I do in my physics-inspired writing.
Posted by Jerome Rothenberg at 12:40 PM