[Continued from previous postings on Poems and Poetics, here and here.]

“They are gone, the pepper trees” 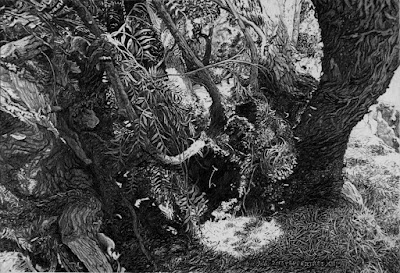 the more a man’s arms

to reach the woman’s

can no longer bear

if the mind will entertain

the black a distance

deeper than a star

heavy as a heave

cry out to you

or is it only

at the side a shadow

beside the fallen bodies

is there a black hole

a place so deep

a memory of where

our place in nature

the ferns take over

where have the bodies

in the world is love

plain in our sight

carved into the center

more what the woman gives

a field of light

down where the world

in front of which

eager to draw him back

that which is lost

leaves only a wound

the mystery of light

more than the mystery

the memory of where

a scar that will not heal

of black on white

drives color from the brain

refraction from the eye

is every image that we see

seen from a height

& every block of wood

we let the shadows go

is learnt by rote

more as a number known

than by a bride & groom

the tallest tree of all

those that surround him

the way that every count

brought back to earth

waiting for the dead

a perch for demons

firm in its nest

the rest is barely

traces of a life

Posted by Jerome Rothenberg at 6:47 AM No comments:

translated from Spanish by Rosa Alcalá

[reprinted from earlier posting on Poems and Poetics, in recognition of recent recoveries & discoveries]

Word is thread and the thread is language.
Non-linear body.
A line associated to other lines.
A word once written risks becoming linear,
but word and thread exist on another dimensional
.....plane.
Vibratory forms in space and in time.
Acts of union and separation.

The word is silence and sound.
The thread, fullness and emptiness.

The weaver sees her fiber as the poet sees her word.
The thread feels the hand, as the word feels the tongue.
Structures of feeling in the double sense
of sensing and signifying,
the word and the thread feel our passing.

*
Is the word the conducting thread, or does thread
.....conduct the word-making?
Both lead to the centre of memory, a way of uniting
.....and connecting.
A word carries another word as thread searches for
.....thread.
A word is pregnant with other words and a thread
.....contains
other threads within its interior.
Metaphors in tension, the word and the thread
.....carry us beyond
threading and speaking, to what unites us, the
.....immortal fiber.

To speak is to thread and the thread weaves the
.....world.

In the Andes, the language itself, Quechua, is a
.....cord of twisted straw,
two people making love, different fibers united.
To weave a design is pallay, to raise the fibers,
.....to pick them up.
To read in Latin is legere, to pick up.
The weaver is both weaving and writing a text
that the community can read.
An ancient textile is an alphabet of knots, colors
.....and directions
that we can no longer read.
Today the weaving no only "represent," they
.....themselves are
one of the being of the Andean cosmogony. (E. Zorn)

Ponchos, llijllas, aksus, winchas, chuspas and
.....chumpis are beings who feel
and every being who feels walks covered in signs.
"The body given entirely to the function of signi-
.....fying."
René Daumal
A textile is "in the state of being textile": awaska.
And one word, acnanacuna designates the clothing,
.....the language
and the instruments for sacrifice (for signifying,
.....I would say).

And the energy of the movement has a name and
.....a direction: lluq'i,
to the left, paña, to the right.
A direction is a meaning and the twisting of the
.....thread
transmits knowledge and information.
The last two movements of a fiber should be in
.....opposition:
a fiber is made of two strands lluq'i and paña.
A word is both root and suffix : two antithetical
.....meanings in one.
The word and the thread behave as processes
.....in the cosmos.

The process is a language and a woven design
.....is a process re-
presenting itself.
"An axis of reflection," says Mary Frame:
"the serpentine
attributes are images of the fabric structure,"
The twisted strands become serpents
and the crossing of darkness and light, a
.....diamond star.
"Sprang is a weftless technique, a reciprocal
action whereby the interworking of adjacent
elements with the fingers duplicates itself
above and below the working area."

The fingers entering the weave produce in
.....the fibres
a mirror image of its movement, a symmetry
.....that reiterates "the concept
of complementarity that imbues Andean
.....thought."

The thread dies when it is released, but comes
.....alive in the loom:
the tension gives it a heart.
Soncco, is heart and guts, stomach and conscience,
.....memory,
judgement and reason, the wood's core, the stem's
.....central fiber.
The word and the thread are the heart of the
.....community.
In order to dream, the diviner sleeps on fabric
.....made of wik'uña.

A Note on Cecilia Vicuña: An artist/poet of multiple means, she has worked with films, installations, & performance pieces, & has moved between her native Chile and New York City over more than three decades. In this work she draws not only from modern & postmodern contemporaries but from (principally Andean) shamanism, oral traditions, mythology, & herbal lore ("ancient and modern texts which help me to understand what I had seen"). The unraveling & weaving that (in her own description of it) characterizes both her written & visual work draws from an almost limitless range of sources, mixing her words with those of others (old & new) in an assemblage or weave of words conceived (like "the sacred Quechua language," she tells us) as knots & threads (quipu in the old terminology, quipoems in hers). If this is a central metaphor for her, the sources for her words are given also as acts of vision in which (she writes) "individual words opened to reveal their inner associations, allowing ancient and newborn metaphors to come to light." And further: "To approach words from poetry is a form of asking questions. // To ask questions is to fathom, to drop a hook to the bottom of the sea. // The first questions appeared as a vision: I saw in the air words that contained, at the same time, both a question and an answer. // I called them ‘divinations.’ And the words said: the word is the divination; to divine is to ascertain the divine."

And quoting therein our brother poet Octavio Paz: I don’t see with my eyes: words are my eyes.

[Note adapted from J. Rothenberg and P. Joris, Poems for the Millennium, volume 2]

Posted by Jerome Rothenberg at 8:59 AM No comments: 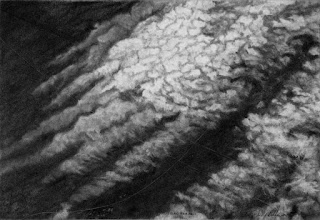 a world of babes

wrapped in its caul

stretched out in coils

the bodies of the lost

who sleep their dreams

so hard to lend an eye to

to see the earth below

when turning softly over

inside the grey world

ready to suck down

at last    at sunset

at the breaking down

to be a cloud

a life gone by

where the winds rush

a god is easy

the face of night

in time, in sex

a pool or lake

the wish for life

where the clouds accrue

I do not want it

that should bring joy

all that they write

turns back on them

glow past their time

an alphabet of sound

the night drifts by

the cloud as metaphor

that will not hold

a paradise of clouds

[Continued from previous posting & commentary on Poems and Poetics.  For the full set of cloud-poem images, you can check it on jacket2.org.]
Posted by Jerome Rothenberg at 6:32 AM No comments: