Outsider Poems, A Mini-Anthology in Progress (2): Four from Adolf Wölfli 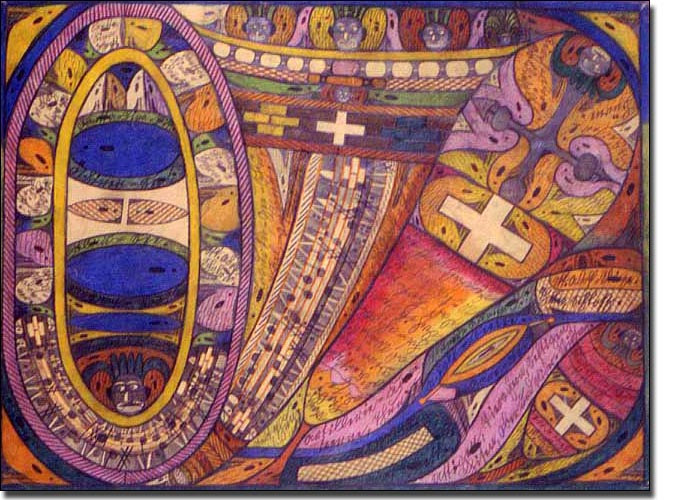 4
'THE DRAGON ROCK - TRIMBACH RAILWAY FOOT AND TRAFFIC BRIDGE TO CHINA, 1909. FROM "FROM THE CRADLE TO THE GRAAVE."

COMMENTARY
with Pierre Joris, from Poems for the Millennium, volume one

The southern half of all the gigantic and majjestic Creation is my … property. Not only the millions and billions of stars. No!! 500 myriads and one star. … I have traveled through all of them in the year 1868. And now, appalling Ca-tas-tro-phe before God the Holy-Spirit, I am swinging on the hideous rope of the gallows, in cell number 3 of the 5th wing of men. A.W.

A key twentieth-century opening [possibly diminished into our own time] was to the work of a number of artists & poets whose mind-sets put them outside the sphere of normal artistic discourse. Presented often as the art-of-the-insane, such work was later designated as “outsider art” [only one of its accumulated meanings] or, in the [more specific] phrase of Jean Dubuffet, its principal early proponent, as art brut (= “raw art”): a beacon of lost & disturbing humanities. On a verbal level, it is marked by transformations of thought & expression as radical & often as revelatory as those of the greatest modern experimenters, or those of traditional speakers of numinous tongues.

Of [the writings of] the Swiss-born Wölfli, who spent the last thirty-five years of his life in confinement at a mental institution, Elke Spoerri wrote: … “Adolf Wölfli became famous as a result of his drawings. With the exception of a few extracts his extensive narrative work has remained unknown. This narrative work is composed of 44 illustrated books (20,000 pages, with over 1400 drawings and over 1500 collages), with epic texts, dialect poems, sound poems, and musical compositions. The elucidation of the content and structural organization of Wölfli’s collected works … shows emphatically that the four forms of expression (drawings, prose, poetry, and music) form a homogeneous whole. A study of the works also reveals an illuminating correspondence between real and imaginary biography.”

Known to Rilke as early as 1921 (“the discordant has been turned to a new concord”) & to the Surrealists by the 1930s, Wölfli’s work was the driving force behind Dubuffet’s founding of the Compagnie de l’Art Brut in 1948. His massive gathering of texts, From the Cradle to the Graave, has never been fully translated into English.

[A FINAL NOTE. The preceding poems (sound & visual) by Adolf Wölfli continue my conjectures toward a global gathering of works outside the conventional literary nexus. I’ll be developing the project – as far as I can take it – with a sense that the term “outsider poetry” can cover a wide range of sources & possibilities, from art brut & mystical/religious poems & offerings to folk & working class poetry, sermons & rants, glossolalia & glossographia, dialect & “nation language” (K. Brathwaite), & so on – works in short both written & oral. Glimmerings of this sort have already appeared in both Technicians of the Sacred & the three volumes (so far) of Poems for the Millennium. For which see also the entries on this blog for June 14, 2009 & August 16, 2008. (J.R.)]

Posted by Jerome Rothenberg at 7:07 AM

Blessings on this project, Mr. Rothenberg.