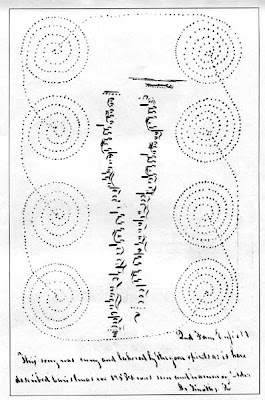 NOTE & COMMENTARY. The United Society of Believers in Christ's Second Appearing — called "Shakers" — originated in England in the mid-eighteenth century and soon centered around the person of Ann Lee (Mother Ann, or Mother Wisdom, or simply Mother), who became "the reincarnation of the Christ Spirit … Ann the Word … Bride of the Lamb." The group practiced communal living and equality of the sexes, along with a reputedly complete abstention from sexual intercourse. After persecutions and jailings in England, Ann brought them to America in 1774, where for many years they thrived on conversions, reaching a maximum size of 6,000 before their demise in the twentieth century.
Between 1837 and 1850 ("known as the Era of Manifestations") the Shakers composed (or were the recipients of) "hundreds of … visionary drawings … really [spiritual] messages in pictorial form," writes Edward Deming Andrews (The Gift To Be Simple, 1940). "The designers of these symbolic documents felt their work was controlled by supernatural agencies … — gifts bestowed on some individual in the order (usually not the one who made the drawing." The same is true of the "gift songs" and other verbal works, and the invention of forms in both the songs and drawings is extraordinary, as is their resemblance to the practice of later poets and artists.
N.B. "To be sure, the term drawing is a misnomer, because the Shakers did not use it themselves when they were referring to these works. In the few Shaker documents in which the gift drawings are mentioned, they are typically referred to as sheets, rolls, signs, notices, tokens of love, presents, rewards, hearts — sometimes prefaced by the adjective sacred. This definition focuses on the function of the works as gifts from heavenly spirits, rather than on the form in which the gifts were materialized. In fact, the gift drawings often include titles, captions, inscriptions, and extended texts, in English as well as in scripts written in indecipherable tongues, that place them on an uninterrupted continuum with other manifestations of belief, such as inspired writing, ecstatic movement, and spontaneous speech, especially in the form of song." (Thus: France Morin, in Heavenly Visions: Shaker Gift Drawings and Gift Songs, The Drawing Center, New York, and UCLA Hammer Museum, 2001 — a book packed with generous examples, more of which can be viewed at http://ubu.com/ethno/visuals/shaker.html.)
Posted by Jerome Rothenberg at 4:27 PM

these are gorgeous! thank you!

Wonderful. This is NEWS, yes!

Saw some of these in Poems for the Millennium, vol. 3 & was stunned. A whole book of these would be incredible!