Wai-lim Yip, from "Dialogues," after Photos by Jonas Yip 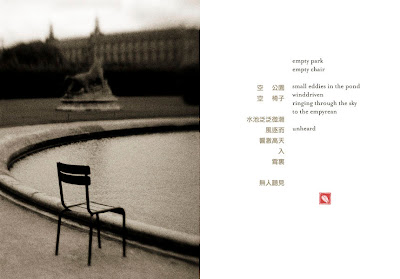 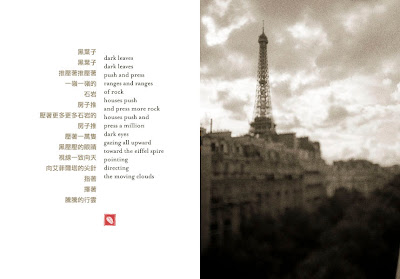 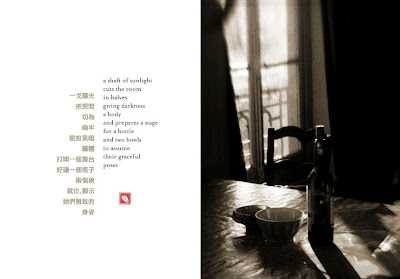 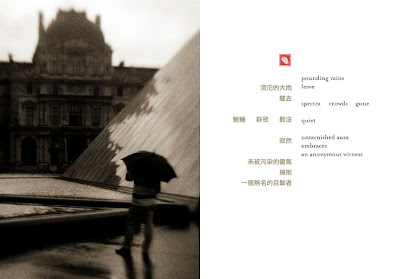 [Click on image to enlarge.]
[1]
empty park
empty chair
small eddies in the pond
winddriven
ringing through the sky
to the empyrean
unheard

[4]
pounding rains
leave
spectra crowds gone
quiet
untarnished aura
embraces
an anonymous witness
N.B. The source of these poems & photo-images – 13 of them presented as “dialogues” – is Paris: Dialogues + Meditations by Jonas Yip and Wai-lim Yip – published bilingually by Nanjing University Press in 2009 & available internationally through amazon.com. The full set of thirteen Dialogues is also posted at Jonas Yip’s "Paris: Dialogue" gallery: http://www.jonasyip.com/paris-dialogues. An exhibition, "Paris: Dialogue,” featuring photographs and poems excerpted from the book, is currently traveling through Taiwan and China, & will arrive in the United States in 2011 with a show at the San Diego Museum of Art.

Jonas Yip is an award-winning photographer & musician based in the Los Angeles area, while readers of Poems & Poetics will likely be familiar with Wai-lim Yip as the author of Pound’s Cathay and Chinese Poetry: Major Modes and Genres (University of California Press). A longtime resident of the United States, Wai-lim Yip has been active for over 45 years as a bicultural poet, translator, critic & theorist with special contribution to East-West comparative literature, aesthetics, & comparative poetics between China & America. In recent years he has been celebrated in China with exhibitions devoted to his archives & conferences devoted to his poetry, as well as publication of his Complete (Chinese) Works in nine thick volumes. Paris: Dialogues + Meditations is the best presentation so far of his original poetry in English.
Posted by Jerome Rothenberg at 6:24 AM

Just stopping by to say hello to poet bloggers and invite you to my ezine www.zombielogicpress.com