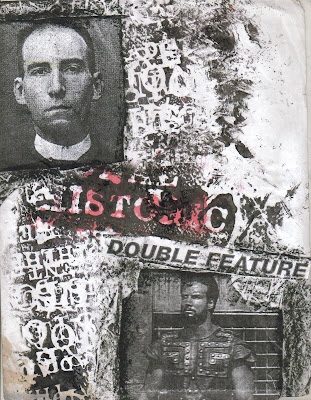 FROM FELIX FENEON'S FAITS DIVERS (C.1906)
Nurse Elise Bachmann, whose day off was yesterday, put on a public display of insanity.
A complaint was sworn by the Persian physician Djai Khan against a compatriot who had stolen from him a tiara.
A dozen hawkers who had been announcing news of a nonexistent anarchist bombing at the Madeleine have been arrested.
A certain madwoman arrested downtown falsely claimed to be nurse Elise Bachmann. The latter is perfectly sane.
On Place du Pantheon, a heated group of voters attempted to roast an effigy of M. Auffray, the losing candidate. They were dispersed.
Arrested in Saint-Germain for petty theft, Joël Guilbert drank sublimate. He was detoxified, but died yesterday of delirium tremens.
The photographer Joachim Berthoud could not get over the death of his wife. He killed himself in Fontanay-sous-Bois.
Reverend Andrieux, of Roannes, near Aurillac, whom a pitiless husband perforated Wednesday with two rifle shots, died last night.
In political disagreements, M. Begouen, journalist, and M. Bepmale, MP, had called one another "thief" and "liar." They have reconciled.
*
In "The Painter of Modern Life," Baudelaire is the first to define Modernism and does so as a conjunction of the eternal and the ephemeral. To find that element of the eternal in the ephemeral which Baudelaire saw as embodying modernity, he turns to an emphasis on the particular form of the living art/art as living of the Dandy. The Dandy is the non-separation of art and life in the conceiving of one's existence as Performance Art. The Dandy becomes not an expression of Romantic personality and individuality, but a form of becoming an animated Other, an impersonator going about performing the actions of a concept, rather than producing the objects of a conception.

This stylized impersonating, non-producing figure begins to appear dramatically" in the works of Wilde and Jarry and in many ways in the "life and works" of a Félix Fénéon, who "creates at a distance" via anonymous newspaper faits divers (discovered to be his and republished posthumously as "Nouvelles en trois lignes" [News/Novellas in Three Lines]), pseudonymous articles in differing registers of language (working class argot, standardized French) in Anarchist and mainstream journals, unsigned translations, and the barely noted in their own pages of his editing of journals featuring the early efforts of rising stars of French literature. Quitting his camouflaged and concealed writing activities, Fénéon works the rest of his life as a seller in an art gallery.

The actual "works" of Fénéon, then, are not written objects per se, but anonymous actions, ephemeral pseudonymous "appearances in print," and the works of others which he affects a passage for in his editorship and translations, in his promoting and selling the art works of others. This "accumulation" which one finds "at a distance" in time as his "complete works," is often unobserved and unknown to his contemporaries, who know of him primarily via his "way of acting," his manner of dressing, his speech mannerisms, and as the public triptych of images of him existing as a painted portrait by Signac, a Dandy-pose photo and a mug shot taken when tried as part of an Anarchist "conspiracy." Fénéon's "identity as a writer" does not exist as "an author," but as a series of "performances," "appearances" and "influences," many of them "unrecognized" and "unattributed."

Ironically, it is his most "clandestine" activity—his Anarchist activities—which brings him the most in to the public and tabloid spotlight. As one of "The Thirty" accused and tried for "conspiracy" in a much publicized trial, it is Fénéon's severe mug shot that for a time presents his "public face."

The severe mug facing the viewer is actually producing a Conceptual Poetry "at a distance." By not penning a single line, by simply "facing the music" to which others pen the lyrics, Fénéon, in doing nothing more than facing the camera "capturing" his image, proceeds to enact a series of dramas "projected" on to him, a series of "identities," and "revelations" which use the documentary material to produce a series of mass-published fictions.

The possible prison term facing the "Félix Fénéon" in the inmate-numbered "anonymous" mug shot, "presents its face" to the viewer, a face "taken," "imprisoned" and "caught" by the image and its publicity. This publicized face facing camera and viewer and possible hard time, is "taken to be" the photo of the face of a being from whom the mask of the clandestine and conspiratorial have been torn off, revealing "the cold hard truth" of Félix Fénéon.

Facing trial, however, all that is learned of this imprisoned face is that it is "the wrong man, an innocent man." This fixed image, acquitted of its "sensational" charges, is revealed not as a truth, but instead as simply a mask, a mask operating like a screen or blank sheet of paper, onto which are projected the dramas, fictions and "think piece" writings of others. Nothing is revealed other than an "identity" which shifts, travels, changes from one set of captions to another. It is via these captions written by others under his image in the papers and placards, that Fénéon continues his "writing at a distance." Simply by facing the camera, facing charges, "facing the music," facing his accusers at trial and facing the verdict and judgment, Fénéon is "writing" a myriad captions, breaking news items, commentaries, editorials, all of which change with wild speeds as they race to be as "up-to-minute" as the events themselves are in "unfolding."

The professionals, these writers, these journalists and reporters of "reality," chase desperately, breathlessly, after the unfolding drama in which the mug shot is "framed," and in so doing produce texts of "speculative fiction," a serial Conceptual Poetry with as its "star player" a writer whose own texts are deliberately written to be unrecognized, hidden, camouflaged, unknown. And all the while, this writer writing nothing is producing vast heaps of writing via the work of others, as yet another form of camouflaged clandestine Conceptual Poetry, "hot off the press."

Rimbaud writes of a concept of the poetry of the future in which poetry would precede action—which in a sense he proceeds to "perform" himself. If one reads his letters written after he stopped writing poetry, one finds Rimbaud living out, or through, one after another of what now seem to be "the prophecies" of his own poetry. That is, the poetry is the "conceptual framework" for what becomes his "silence" as a poet, and is instead his "life of action."

In these examples, one finds forms of a "conceptual poetry" in which the poetry is in large part an abandonment of language, of words, of masses of "personally signed" "poetry objects," "poetry products." One finds instead a vanishing, a disappearance of both language and "poet" and the emergence of that "some one else" Rimbaud recognized prophetically, preceding the action--in writing—in the "Lettre du voyant," "the Seer's letter"—as "I is an other."

An interesting take on a conceptual poetry in writing is found in one of Pascal's Pensees, #542:

"Thoughts come at random, and go at random. No device for holding on to them or for having them.
A thought has escaped: I was trying to write it down: instead I write that it has escaped me."

The writing is a notation of the "escaped" concept's absence, its escape that is a line of flight that is a "flight out of time" as Hugo Ball entitles his Dada diaries. Writing not as a method of remembering, of "capturing thought," but as the notation of the flight of the concept at the approach of its notation.

Writing, then, as an absence— an absence of the concept. A Conceptual Poetry of writing as "absent-mindedness"!—A writing which does nothing more than elucidate that the escaping of thoughts "which come at random, and go at random" has occurred.

This flight of the concept faced with its notation—indicates a line of flight among the examples of Rimbaud—a "flight into the desert" as it were, of silence as a poet—and of Fénéon—the flight into anonymous writing of very small newspaper "faits divers" items punningly entitled "Nouvelles en trois lignes" (News/Novels in Three Lines), of pseudonymous writings in differing guises at the same time according to the journals in which they appear, and as translator and editor as well as "salesperson" in a gallery of "art objects," a conceptual masquerader among the art-objects embodying "concepts" and becoming no longer "concepts' but "consumer items." Fénéon's framed mug shot on to whose mug is projected a "serial crime novel," written by others and "starring" the mug in the mug shot, a writer of unknown and unrecognized texts who now vanishes into a feverish series of captions and headlines.

Anonymity, pseudonyms, impersonations, poets who write their own coming silence and "disappearance" as an "I is an other," the deliberately unrecognized and unrecognizable poet whose mug shot becomes the mass published and distributed "crime scene" for police blotters and headlines, speculative fictions and ideological diatribes, the writing which is a notation of the flight of the concept, the writing of non-writers who "never wrote a word," yet whose concepts may be found camouflaged, doubled, mirrored, shadowed, anonymously existing hidden in plain site/sight/cite—these nomadic elements which appear and disappear comprise a Conceptual Poetry in which the concepts and poets both impersonate Others and reappear as "Somebody Else," an Other unrecognized and unrecognizable found hidden in plain site/sight/cite.

[Excerpted from a longer essay/talk, “Conceptual Poetry and its Others,” written for a symposium at the Poetry Center of the University of Arizona, 29-31 May 2008. See also David Baptiste-Chirot's blog postings, both visual & verbal, at davidbaptistechirot.blogspot.com. More of his visual work has recently been posted on the new post-literate: a gallery of asemic writing.]
Posted by Jerome Rothenberg at 6:18 AM

Just remember that Feneon was a terrorist (4th july 1982) and he was also an anticemite who led lynch-mobs at jews.