Jess (Collins): Images from "Tricky Cad" with an anecdote, in memory 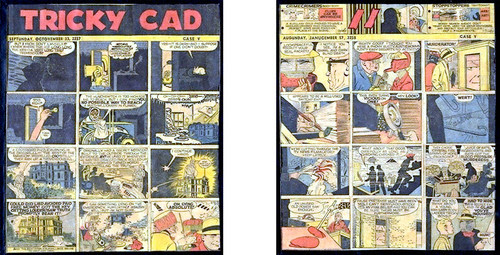 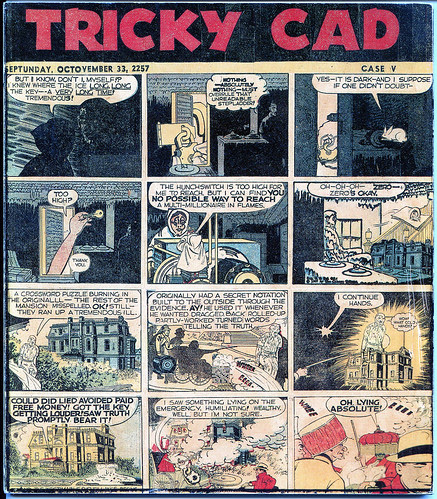 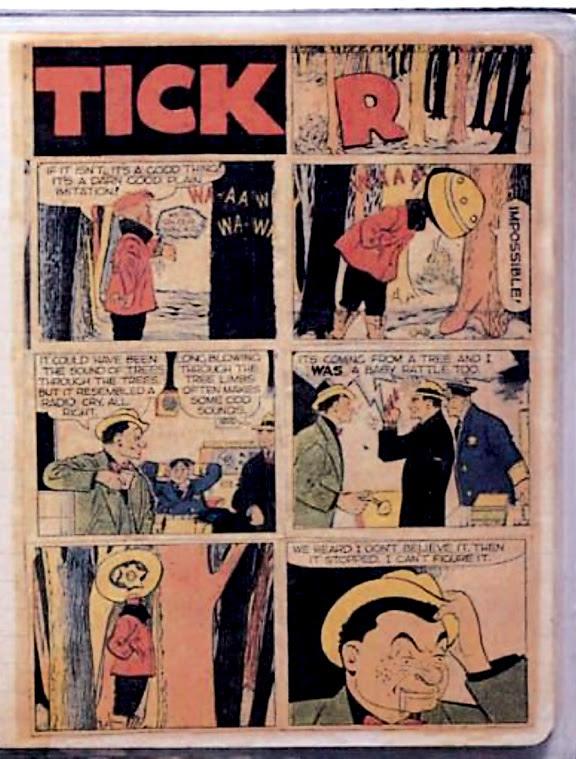 When I first came across Tricky Cad, Jess's ferocious cut-up/collage from the old & very popular Dick Tracy comic strip, I spoke to him about making it a part of of a small (16 page) book that we intended to publish by the cheapest means then available. He called the book O! & filled it with it with mostly Victorian & photo-inspired collages, plus his own handwritten & handtyped poems in the manner, I thought, of Christian Morgenstern, whom he was also then translating. The deconstructed comic strips brought the book into the proto-pop world, of which we were still hardly aware, & served I thought as a perfect centerfold (albeit in black & white) for the book we were planning. When O! was nearly done & ready to pass along to the offset printer, Jess raised the sometimes dicey question of permissions. His secret wish, he said, was to make contact with Dick Tracy's creator Chester Gould, who was one of his longtime heroes, & this would give him a chance to do so. I gave him the go-ahead, only to hear a few weeks later that Gould had not only denied permission but had threatened to sue all of us, if I remember it correctly, for every cent we had. There was a lesson in all of that, but in the face of Gould’s threats, which he could afford better than we could, the only choice we had was to retreat. Jess therefore constructed a marvelous comic-style centerfold, “That Sly Old Gobbler or the Orange,” carrying forward the Victorian imagery, and it took a legal/judicial change in the status of parody & appropriation before Tricky Cad was finally – & safely – published. For myself the present posting presents my first chance to join in celebrating Jess’s masterwork, though a full reproduction of O! (in the non-Tricky Cad version) appears in A Book of the Book, edited a few years ago with Steven Clay. (J.R.)
Posted by Jerome Rothenberg at 6:38 AM

That looks amazing. As is "A Book of the Book", by the way.

I ordered a reading copy.
Thank you for showing this.

Does God live in the WV algo?

After reading this post I purchased a book of Jess's work form Amazon and was disappointed that it only contained (on the cover) "Ticky Cad Case V". How many tricky Cad strips are there? Have they all been compiled, and published?

Do you think there's any chance of someone collecting and publishing Tricky Cad now? I wrote to Fantagraphics and suggested it, getting silence in return. I spoke to one owner of an original at the Olympia Gallery in NYC, and she says they keep theirs in deep storage because they're deteriorating, and some have (in her words) become invisible.

This is tragic! I've assembled all the ones I can find, including the examples above (I bought the book with the cover shown), at my flickr page. Some of it is scans I made, some of it was found online. This is fantastic work, done with X-Acto blades and rubber cement before the days when Photoshop made mash-ups easy enough for anybody to do them, and they're part of the history of Pop Art.

If the prestige publisher of comic book reprints won't do it, what other avenues are there? Friends of the artist? Straight art historians? Time is getting shorter as the newsprint originals crumble and fade.