Outsider Poems, A Mini-Anthology in Progress (18): from the Bengali Poems of Binoy Majumdar 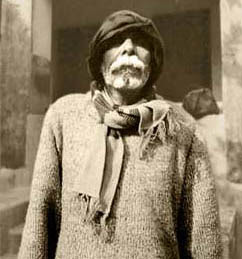 Translations from Bengali with commentary & tribute by Aryanil Mukherjee

Binoy Majumdar (1934-2006) was a brilliant, eccentric, obscure and controversial poet whose life and work await chapters of penetrating research. Binoy is an extremely rare poet – it is hard to find a parallel in the western hemisphere. There is an intense purity in his work in which geometry, mathematics, science and logistics couple with a unique lyric genre. Despite being a fine and talented engineer, a brilliant, innovative mathematician, a polyglot ( in all modes of use he was fluent in Bengali, English and Russian) and an even more brilliant poet, Binoy led a rather distraught and disoriented life of extreme poverty and isolation. Failed by one-sided love (for Gayatri Chakravorty Spivak), he lost his mental composure and attempted suicide several times in his life. At times, he would turn violently schizophrenic. In the 1990s, the state government of West Bengal, upon request from his literary comrades, provided some support. It didn't restore his physical and mental health. However, during his stay in the state-run hospital, he wrote a book of skeletal poems - hAspAtAle lekhA kabitAguchchha (Hospital Poems) which won him the prestigious national poetry award (Sahitya Academy Purashhkaar) in the last year of his life. He remained largely estranged and unnoticed outside the teeming ambience of the Bengali poetry scene for decades. Today, however, after his demise, Binoy is beginning to attract a huge following among younger poets.

Born in Myanmar (erstwhile Burma) on 17 September 1934, Binoy moved with his family to West Bengal (India) during the second world war. He was educated initially in the prestigious Presidency College (University of Calcutta) and went on to graduate in Mechanical Engineering from Bengal Engineering College, Calcutta, in 1957. His first book of poems - nakshatrer Aloy (Star Light) was published while he was in his 20s. It was however, his second book, aghrANer anubhUtimAlA (The Feeling Cycle of Autumn), later and more famously republished as phire eso chAkA (Come Back, O Wheel, 1962) that received wide acclaim and gradually, gave Binoy Majumdar a deep engraving on the mantle of Bengali poetry. phire esho, chAkA was written using a profoundly scientific lyric in the form of a journal. This was a collection of love poems dedicated to his contemporary Gayatri Chakravorty (“Chaka”, meaning “wheel” in Bengali, was a funny truncation of Gayatri’s surname).

Critics have pronounced Binoy Majumdar as one of the ablest successors of Jibanananda Das - the poet who revolutionized Bengali Poetry after Rabindranath Tagore. No surprise Binoy drew from bountiful nature, the varied flora and fauna of the riverine Bengal plains. At the same time, scientific objectivism and systematic observation found a firm footing in his unique lyrical voice. His ability to relate via simple laws of physics, the various elements of nature to one another, smartly aided by objectivity and scientific enquiry, makes his poetry absolutely remarkable and unparalleled. His genre of work could be described as a scientific-artistic field journal.

Binoy’s bold and revolutionary depiction of sexuality gives his work another interesting dimension. He abundantly used vivid sexual imagery in a series of poems like Amar bhuttay tel (My Oiled Corn-cob), where he gives an intensely poetic but intricately graphic description of a sexual intercourse. Binoy emphasized the physicality of the process of cohabitation by trying to narrate scientific truth through essentially journalistic observations.

Binoy’s approach to poetry in a certain sense is rather unconventional because his work gives the impression of neutral scientific reportage and is themed on strange natural observations – for example, the changing shape and position of the sun during a solar eclipse. A great poet, left much ignored and unnoticed for the most part of his life, Binoy died in his maternal home on December 11, 2006.

A few complete poems from phire eso chaka ( Come back, O Wheel) - Binoy's innumerably reprinted, redesigned, replenished and refabricated book and his most talked about poetry collection – are translated here

One bright fish flew once
to sink back again into visible blue, but truly
transparent water - watching this pleasing sight
the fruit blushed red, ripening to thick juices of pain.

Endangered cranes fly, escaping ceaselessly,
since it is known, that underneath her white feathers exist
passionate warm flesh and fat;
pausing for short stalls on tired mountains;
all water-songs evaporate by the way
and you then, you, oh oceanfish, you...you
or look, the scattered ailing trees
foliaging expansive greenery of the world
churn it up with their deepest, fatiguing sighs;
and yet, all trees and flowering plants stand on their own
grounds at a distance forever
dreaming of breathtaking union.

Like wet gorges our feel
limited, confined; valleys, woods and hills
all covered in fog and clouds for the past few days.
Tell me how much of the multitudes of earthly taste
does the failed buds of a cat’s tongue feel ?
Yet all the crisp and subtle, sharp experience,
like flower thorns or the incisiveness of orbits
of distant stars, of the far beyond.
Anyway, despite it, the stupendous air of the sky
not large currents, fluxes with crosswinds.
Unsuppressed by the conflicts of these uncertain
excitement, the pine still grows erect
like true desire, towards a lightening sky.

I politely woke up in the morning to a flowering hope.
My future, firmament were lit up
by your talent, preserved like tinned meat.
Nervously, I conjured up a joint meeting of tea-thoughts,
thoughts of fresh air from the eternal summit.
You inexistential, as imaginary as a visual aberration
or maybe extinct, dead.
Or have deserted me like your illegitimate newborn, by the road.
I think of life, after the wound heals
I know it wouldn’t hair anew; pain sits
calm on sorrowed thoughts like a nocturnal fly –
on the way back from hospital, in momentary mind.
Sometimes unawares, I know, the pain will wither
with the falsity of a child urinating in sleep.

If you never come again

If you never come again, never blow through these steaming regions
like cooling drifts of the upper air, even that absence is an encounter.
Your absense is as of the blue rose
from the kingdom of flowers. Who knows, some day
you may yet appear. Maybe you have, only you are too close.
Can I smell my own hair?
Marvellous sights have been seen.
A full moon was to have risen last night --
only a quivering sickle appeared!
It was an eclipse.

I have given up strewing grain on the ground
to have the birds join me at lunch.
Only when the baby is cut adrift
does it have its free hunger and thirst;
like taking off a blindfold to be confronted with
a curtain, being born
into this vast uterus, lined with a sky porous with stars.

What is needed is a sudden turn

What is needed is a sudden turn
leaving the swift hand that plucks butterflies out of the air
gaping at a loss.
The others exist pale and ghostly as stars
brought to brief life by a total eclipse of the sun.
But I cannot change my course now; can the leopard
unspin its leap in midair?
Moreover, they may still be wrong. She can yet appear.
Cream rises only if one lets boinling milk stand and cool.

The pain remained with me

The pain remained with me a long time.
Finally the ancient root was cut --
from immersion I emerged blinking into light.
I am restored to health now though the season is gray.
Surgery everywhere; this tea table was once the flesh of a tree.

amazing poet! thanks jerome. have you seen this video of him? i don't understand bengali but it appears rather heartbreaking.

Hi,
Thanks for such a brilliant post.! :-)
Can you help us to expand Wikipedia article on Phire Esho, Chaka (http://en.wikipedia.org/wiki/Phire_Esho,_Chaka)
Thanks!

Binoy Majumer has used mathematical concepts in his poetry. Legacy is, usually poets avoid mathematics; and therefore, he was not properly understood by the Begali poets and Binoy was not most popular one, though exceptional. During last few years Professor Narayan Ch Ghosh, mathematician, has analysed his poems from mathematical stand point. He has written number of articles in different journals. Those extra-ordinary writings have opened a new window for assessment of Binoy from different point. Now revaluation has started.
Professor has written article on phire esho, chaka contradicting the concept 'a funny truncation of Gayatri’s surname'. Analysing the then social conditions Ghosh says Chaka pragatir pratik (Wheel is symbol of progress) which Binoy called to come back to steer social movement for progress. According to Binoy all progress is manifestation of extreme love.

Binoy Majumer has used mathematical concepts in his poetry. Legacy is, usually poets avoid mathematics; and therefore, he was not properly understood by the Begali poets and Binoy was not most popular one, though exceptional. During last few years Professor Narayan Ch Ghosh, mathematician, has analysed his poems from mathematical stand point. He has written number of articles in different journals. Those extra-ordinary writings have opened a new window for assessment of Binoy from different point. Now revaluation has started.
Professor has written article on phire esho, chaka contradicting the concept 'a funny truncation of Gayatri’s surname'. Analysing the then social conditions Ghosh says Chaka pragatir pratik (Wheel is symbol of progress) which Binoy called to come back to steer social movement for progress. According to Binoy all progress is manifestation of extreme love.
Sarmistha Biswas

thank u aryanil for your commentary on binoy majumder,kindly note the following--1)nakshatrer aloy--is- in the star light and not-star light,2)the name of the second book of binoy is--gayatrike of which phire eso chaka is the second edition,3)aghraner anubhutimala(autumnal feelings) is his 5th book,4)binoy also wrote some valuable essays the most important of which is--ishwarir swarachita nibandha(essay written by goddess herself),in it binoy described his own poetic theory,if translated in english or other european languages benoy may also be accepted as a great literary theorist,have u seen books of benoy edited by me and published by prativash?--with love--tarun bandyopadhyay

dear aryanil,
you have praised highly binoy's bold and revolutionary depiction of sexuality in poems which are popularly known as vutta series or corn-cob series poems.but in these writings one can find only detailed descriptions of preparation and actual acts of sexual intercourse of a man and a woman.there is no poetry in these writings.binoy actually revolutionized the depiction of sexuality in his truly memorable but less known book of poems-'aghraner anubhutimala'(chains of autumnal feelings).in the poems of this book binoy in highly metaphorical language has described the male and female sexual organs including the rectum.in the background of these descriptions (some of which are highly repulsive) binoy expresses hid ideas of love and separation,life and death,truth and falsehood,mind and matter and on various subjects which simply overwhelm the reader with wonder and pleasure.this book should be translated immediately into major european languages. as a poet binoy is great and unique.the world should know his poems and his poetical thought.--tarun bandyopadhyay