From Retrievals 1955-2010: A Postface and an Announcement 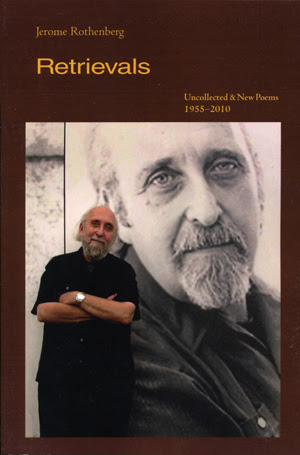 [The following is my postface to Retrievals: Uncollected and New Poems 1955-2010, the official publication date for which is April 1, 2011. It’s my understanding that copies are now available from junctionpress.com and spd, and numerous excerpts have been published over the last two years on Poems and Poetics. An accompanying publicity release from Junction Press follows the postface.]

The work of retrieval, once I was into it, came to me with a feeling of great surprise (sometimes disturbance) & with a sense, often, that I was reading someone other than myself. For some of the work this was hardly surprising, since the earliest poems gathered here go back over a half century – a ridiculously long time for anyone to keep track of all his thoughts & utterings. And in the course of things, though I’ve been luckier than most with publication, a huge amount of writing still got dropped or lost, & some of it, when retrieved, might as well have been the works or words of another, coming at me as if for the first time & often in a voice or with a style I don’t remember.

Can I speak of myself as another then – not as Rimbaud did, who had it all compressed into a few years’ span, but with a lifetime (& not too short at that) receding behind me? I can’t entirely account for chronology nor have I arranged the poems with anything more certain than the designation of each section of the book by a decade or two. I do know, however, that the two terminally rhyming series near the start (“Five Baroque Sonnets” & “Two Poems After Emily Dickinson”) go back to a time when I was barely out of my teens – not really enough to represent that aspect of my coming into poetry. What’s less obvious is my recollection of how this was playing off against my feeling that poetry as I wanted or needed it should be inventing or changing forms of meaning & expression in so far as I could make that happen. As the time comes closer to the present, that much grows clearer in my mind, & the poems gathered here, unpublished in earlier collections or sometimes unpublished anywhere, raise memories about their writing or appear alternatively as the work of someone, some poet other than myself.

All of that, while retrospective clearly, is markedly different for me from a collected poems that would bring together previously published & more easily remembered work. The reason why certain poems remained unpublished or failed to be republished has something to do with the practicalities or economics of publication rather than with the value that one might place on them in retrospect. Even more perhaps it has to do with the impetus to shape whole books rather than to assemble collections of isolated individual poems. In the wake of new work, however, what has been elided falls easily out of memory, as if more recent work can only cast a shadow over work that came before.

It was through Mark Weiss that I learned how much there was to be retrieved. With him too I began the work of turning the retrievals into a book that might have its own coherences & reasons for existing. The material that we had before us was largely from the archival collections at the University of California in San Diego, where Mark had been working on other projects when he came across them. The time span for what was there went back into the late 1940s & the early postwar years, but my own preference was to push the juvenilia aside &, with only a couple of exceptions, to move the actual gathering ahead by at least a decade. I found too, as I got into it, that my own sense of chronology was hit & miss – no dates on most of the manuscripts until I got into the 1980s, & spotty even then. I did however have a much better if less precise sense of what came earlier & what came later, & that a division of the work into three distinct phases was both possible & generally reliable. Within those divisions I arranged the order of poems with some sense of earlier & later but without an overall regard for dating so much as for what I thought of as other, more meaningful juxtapositions.

The first section 1955-1970 moves quickly, then, into & out of what some of us were then calling “deep image” & merges at the end with poems reflecting the ethnopoetics of Technicians of the Sacred & the first glimmerings of the “ancestral poetry” in Poland/1931. Looking back at these now, I also detect a developing attention to experimental forms – even a kind of proto-“language poetry” – that will become more pronounced in the second section 1970-1990, while linked there to specific themes & stances. It’s clear to me at the same time that many of the uncollected poems from the 70s & 80s reflect my growing inclination to compose whole books or to write in extended series: Poland/1931, A Seneca Journal, That Dada Strain – a triumvirate of concerns (Jewish, Indian, Dada) that characterizes this period & maybe my work as a whole. In the final two decades (1990-2010) I continued to write & publish in series (The Lorca Variations, A Book of Witness, The Burning Babe, A Book of Concealments, 50 Caprichos after Goya) & to defer poems not intrinsic to those series, which means in some sense that a still ample body of work not included elsewhere has remained uncollected or unpublished in book form. And to top this off I have attached two sections of writings that cross over chronological barriers: a gathering of poems, “Ikons & Altar Pieces,” derived from christological & other religious imagery glimpsed on travels, & another of three short plays & a fragment of an unfinished “Steinian opera.”

My inclination otherwise has been to leave the earlier poems as I found them, rarely to revise at this distance but to include those poems that still speak to me & to exclude those that don’t. What emerges for me, if I read myself correctly, is a book that charts my life as a poet as well as a larger collected poems might do if it were arranged without the poems collected here. When that larger book happens, I would want it to include most of what appears in the present volume, but for now it pleases me that what has long been hidden can finally come into the light. In that process too I find that the distinction between old & new has largely been called into question. For that I’m deeply grateful to Mark Weiss, & if there were to be a formal dedication to this book, it would surely be to him.

Jerome Rothenberg’s Retrievals: Uncollected and New Poems, 1955-2010
Here’s what Geoffrey O’Brien, editor-in-chief of the Library of America, has to say about Retrievals:

"Jerome Rothenberg has done as much as anyone over the past half century to shake up received ideas of what poems ought to be like, by demonstrating or suggesting an endless profusion of other pathways, other shapes, other stances, other contexts: as if to say that it is always possible to begin over, to invent new rules for the most ancient of games, not once but over and over. Now to the rest of his poetry—a body of work still underrated, in part because his extraordinary work as editor and translator may at times have overshadowed it—is added this bonus: half a century of work previously uncollected, spilling out in profusion from the interstices of all the previous poetry and revealing multiple layers of exploration and invention. Here are baroque sonnets, gnostic hymns, language games, parables, elegies, conversations, landscapes inner and outer, dream poems, poems noisy and nearly silent, poems mournful and ecstatic and uproarious, poems in dialogue with other poets from the Babylonians and Toltecs to today or the day after, by way of Oppian, Lorca, Pound, Duncan, Mac Low, and culminating in a starkly pared-down suite of Ikons & Altarpieces. Retrievals is the book of a life, and the book of an era."

A central figure of both the “deep image” and ethnopoetics movements, and a pioneering experimentalist, Jerome Rothenberg is the author of over 80 previous books of poetry and ten of translations, as well as editor of nine seminal anthologies. The importance of his work has been recognized since the beginning of his career. Here is a small sample of the dozens of comments from his peers:

Eliot Weinberger:
[Rothenberg] is probably the gateway to more corners of the earth than any poet in this century. In the pages of a Rothenberg book– the poems as much as the anthologies–the world has a coherence. ... Rothenberg, as so few others, has managed to construct a world. And more: it is a world, even in the hells of the Holocaust, of ecstasy and a fundamental joy. Not Utopia, but a model of the world to set against the world.

Robert Duncan:
Rothenberg in his Poland brings us what we much needed–the dialectical imagination that so vivifies what we took to be contradictory dialects that they leap to dance in the comedy of a new multiple identity's language. With what a humanizing redemptive gusto, once our animal spirits are brought back into play, and yet throughout alive–with the cutting edge of an open attack, this Chasidic cowboy-and-Indian…comic voice comes.

Charles Bernstein:
The significance of Jerome Rothenberg’s animating spirit looms larger every year. …[He] is the ultimate ‘hyphenated’ poet: critic-anthropologist-editor-anthologist-performer-teacher-translator, to each of which he brings an unbridled exuberance and an innovator’s insistence on transforming a given state of affairs.

There are, as Eliot Weinberger says, worlds to discover within this book. And not a dull moment.

Retrievals can be ordered from SPD, the larger book wholesalers, and from junctionpress.com.