Outsider Poems, a Mini-Anthology in Progress (23): From Hildegard of Bingen’s “Scivias”: Vision 7, The Devil 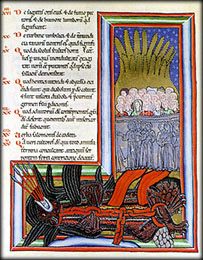 Then I saw a burning light, as large and as high as a mountain, divided at its summit as if into many tongues. And there stood in the presence of this light a multitude of white-clad people, before whom what seemed like a screen of translucent crystal had been placed, reaching from their breasts to their feet. And before that multitude, as if in a road, there lay on its back a monster shaped like a worm, wondrously large and long, which aroused an indescribable sense of horror and rage. On its left stood a kind of market-place, which displayed human wealth and worldly delights and various sorts of merchandise; and some people were running through it very fast and not buying anything, while others were walking slowly and stopping both to sell and to buy. Now that worm was black and bristly, covered with ulcers and pustules, and it was divided into five regions from the head down through the belly to its feet, like stripes. One was green, one white, one red, one yellow and one black; and they were full of deadly poison. But its head had been so crushed that the left side of its jawbone was dislocated. Its eyes were bloody on the surface and burning within; its ears were round and bristly : its nose and mouth were those of a viper, its hands human, its feet a viper's feet, and its tail short and horrible.

And around its neck a chain was riveted, which also bound its hands and feet and this chain was firmly fastened to a rock in the abyss, confining it so that it could not move about as its wicked will desired. Many flames came forth from its mouth, dividing into four parts: One part ascended to the clouds, another breathed forth among secular people, another among spiritual people, and the last descended into the abyss. And the flame that sought the clouds was opposing the people who wanted to get to Heaven And I saw three groups of these. One was close to the clouds, one in the middle space between the clouds and the earth, and one moved along near the earth; and all were shouting repeatedly, "Let us get to Heaven!" But they were whirled hither and thither by that flame; some did not waver, some barely kept their balance and some fell to the earth but then rose again and started toward Heaven. The flame that breathed forth among secular people burned some of them so that they were hideously blackened and others it transfixed so that it could move them anywhere it wanted. Some escaped from the flame and moved toward those who sought Heaven, reiterating shouts of "O you faithful, give us help!" But others remained transfixed.

Meanwhile, the flame that breathed forth among spiritual people concealed them in obscurity; but I saw them in six categories. For some of them were cruelly injured by the flame's fury; but when it could not injure one of them, it burningly breathed on them the deadly poison that flowed from the worm's head to its feet, either green or white or red or yellow or black. But the flame that sought the abyss contained in itself diverse torments for those who had worshipped Satan in place of God, not washed by the font of baptism or knowing the light of truth and faith. And I saw sharp arrows whistling loudly from its mouth, and black smoke exhaling from its breast, and a burning fluid boiling up from its loins, and a hot whirlwind blowing from its navel, and the uncleanness of frogs issuing from its bowels; all of which affected human beings with grave disquiet. And the hideous and foul-smelling vapor that came out of it infected many people with its own perversity. But behold, a great multitude of people came, shining brightly; they forcefully trod the worm underfoot and severely tormented it, but could not be injured by its flames or its poison. And I heard again the voice from Heaven, saying to me: God strengthens the faithful so that the Devil cannot conquer them.

[A NOTE ON THE PRECEDING. Of her initiatory visions, Hildegard (1098-1179) wrote later: “Up to my fifteenth year I saw much, and related some of the things seen to others, who would inquire with astonishment, whence such things might come. I also wondered and during my sickness I asked one of my nurses whether she also saw similar things. When she answered no, a great fear befell me. Frequently, in my conversation, I would relate future things, which I saw as if present, but, noting the amazement of my listeners, I became more reticent.” In the vision & the resultant withdrawal, her experience resembles, however much drawn into the church’s center, those of shamans, seers (voyants) & poets, wherever & however situated. Like the great outsiders too, her life & writings show a range of new inventions: music & verses that come down to us in their recent revival; what may have been the first European ”morality play” before there were commonly performed morality plays; an erratic & innovative use of Latin as her language of choice; the creation of a new alphabet & language (= lingua ignota = unknown language, litterae ignotae = unknown writing); & the translation of visions into three visual-verbal sets or books – a mixture in her case of visions & self-exegesis. Those books called Scivias (= Scito vias [Domini] = Know the Ways [of the Lord]), a mix of words & visual illuminations, possibly of her own making, are a sure sign of how vision & language may intersect. (J.R.)]
Posted by Jerome Rothenberg at 6:14 AM

i don't understand the parenthetical 23

now what is it like from the worm's point of view, i wonder?