David-Baptiste Chirot: An Outsider Poet of the No, Carlos Oquendo de Amat 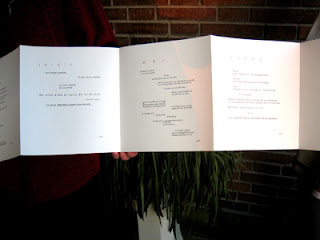 Carlos Oquendo de Amat, a Lima street kid who published one book, 5 Meters of Poems, on a folded sheet of paper five meters long, then gave up writing to join the Communist Party, and bounced in and out of jails and tuberculosis wards in a half-dozen countries before dying in Spain just before the civil war.
--Eliot Weinberger, "On Omar Caseres" Jacket 3, 1998

Among the poets Eliot Weinberger writes of in his excellent brief essay which makes one hunger in the night, the day, all the time -- for these poems, poets, so far away, and across the mountains of another language, as hardly any of their poems are as yet available in English . . . a few stand out and one is Carlos Oquendo de Amat who stopped writing poetry at age 19 and turned to Marxist politics --

Inspired by wanting to read these poems I began studying Spanish in a slightly more organized way than previously, as much of what I learn is from Visual Poetry and Mail Art calls --

As one may see in the images here, Five Meters of Poems is created as a book/poem-object in itself, with the folding accordion construction, and with the varying layouts of the lines on each page--

In terms of the layouts and the book as poem-object, the work is related to some of the other modernisms of the time, especially Russian Futurism, although these were probably unknown to the Peruvian poet.

There are also the influences of the cinema and perhaps of the calligraphy inscribed scrolls of Japanese texts, folding and unfolding as a series of screens, with each screen intimately interrelating with the poem just preceding it and the one just following, so that each poem brings with it the energies and directions of those contiguous to it in an interplay and inter-media. This interrelationship among the poems has a connection which may be shortened by folding—in which two poems are “touching each other” at the top of the wave or mountain, and then just as swiftly made much more distant by unfolding the mountain/wave into waves of plains/planes, "folded together shortened or lengthened distances," following of “unfoldings” in which the poems aren’t “separate” but interrelated, inter-media, This interrelationship and Inter-media is also a way in which differing texts may encounter each other –by folding a poem at one end close to one at the distant other end--not in a linear progression, but as one accomplished by linkings as with hypertexts. Far from the "centers" of art and poetry of the world of the 1920's Amat nonetheless is creating a book-poem-object form stretching out to over three meters (not the five of the title in actuality) of layouts of poetry which is as "advanced" as any writing of the period.  If not more so, in many ways also—as, like the Russian Futurists, Amat is fusing, folding together, avant-garde poetry with avant-garde politics.

Another Peruvian poet, Cesar Vallejo, was also doing this, in a completely different way, this fusing, although unlike Amat he did not hear and follow the call of one vocation at a time, but of both --

Outside of the centers of poetry and art, and outsiders to the writings of their fellow Latin American poets . . . poets like Amat seize convulsively the spirit of the times, the modern spirit, which had been first mapped out by Baudelaire in his essay on "The Painter of Modern Life."  Inventor also of the prose poem, Baudelaire indicates a triangulation of painting, poetry and prose-poetry as a method for presenting words as images not only descriptively but in the Correspondences among Symbols, which Mallarmé will later turn into radically differing forms of layouts, of font sizes, of types of fonts used and the character of the physical form of the book containing the poems . . .

The conjunction of these writings may be "seen" and "read" simultaneously as contemporary versions of Illuminated Manuscripts such as the Book of Kells, where image word and idea are all intertwined as one, yet that one teeming with a myriad smaller images, ideas, and forms on the verge of being letters. The shifting of the handwritten fonts within one letter or across several words is a much earlier version of today's uses of various fonts, layouts and sizes to create Visual Poetry or lexical poetry which aspires to a kind of visual form without the impulse of the image behind it.

Already in Amat one finds the uses of advertising, brand names, Jazz, autos, slang--all the things which William Carlos Williams in the same years was attempting for the first time in his masterpiece Spring and All. Even with these new methods and lexicons, the lyric impulse remains very much alive and forceful, and so there is a tension among the new structurings of the poem and its maintaining the lyrical impulse as songs of the new vocabularies and sounds of the modern cities . . . or rhythms of the large modern cities as Baudelaire puts it in his famous description of the Prose Poem--

It is often remarked how at many places and via many quite different persons the same or very similar ideas and images may be held simultaneously around the world; so it is that though so isolated geographically and culturally, Amat's work is taking place "outside" and in company , unknowingly, with many other poets of the period addressing many of the same questions, themselves “outsider’ in their own countries and cultures. It is as though birds are gathering in the higher atmospheres where Baudelaire's Albatross lives, --and at the same time, a bursting forth of rockets and satellites orbiting the earth swarming from the distances with their teeming transductions and translations, transposings, of the lexicons of new forms of flight—the airplanes, rockets, blimps . .

While it's difficult to find much in English re Amat, in Spanish one finds that there is also a problem in tracing out more of the outlines of this person, their life, their ideas . . . since Amat stopped writing at age 19 or 20, and his work is not only very small but also made in such an unusual form, and exhibiting as it were an outside connection with the outside world unknown to most of the audience of his area, his book is seemingly for the most part consigned to being a kind of "oddity," or "cult classic of a small band of devotees" without much attention paid to it beyond remarking on its quirks. With time I have begun to find more serious studies, which move beyond the "outsider" factors of the book's "freakish appearance and style," yet on the whole Amat's work has remained obscure and followed it appears to be by primarily the kind of cult-like lovers of the poet and his work who take the time and energy to carve these poems into the mountainsides . . .

Perhaps its the distance between oneself and the poet, the work, which draws one so strongly to an outsider figure--that is, the distances of forms and languages unknown and histories that are part of an other world and time and culture . .. perhaps it is all these distances to overcome what one has recognized in an immediate and uncanny flash of recognition that creates the power of the Outsider figure . . .and of the Outsider’s works to create its devoted followings while never attaining to the popularity of the best selling or more accepted, academic forms of writing . .

In fact, one may even say in Amat’s case, that by leaving poetry after one book, he is refusing to become a “successful professional” poet and theorist.

The Outsider then that draws one to the Outside is the uncanny semblance with the figure of one’s own being, of one's own desires, impulses . . . the uncanny recognitions of one's possible lives, shadows, existences beyond the small circle of the moment--a circle which even as it grows bigger may remain always small until meeting the poet such as an Amat whose obscurity and distances beckon to one far more fiercely than those easily reached, easily read, easily understood and categorized.

The Outsider, and the Poet of the No, of the Refusal to write in favor of being part of revolutionary actions, may also be understood in their refusal of the "easy way, the nearby, the familiar." Instead, the Outsider poet and poet of the No exemplify that shock of recognition which Melville wrote of and Emerson called an event of the uncanny--to find someone and something at once familiar and unknown, to find an immediate affinity with things very distant--and at the same so very near.

In this way, there is a flip side to the SEARCH and DESIRE, the WILL for the "taking possession of" the Outside, the outsider, the No--the flip side is that the Outsider, Outside and No are not only found rather than sought, but that they also are FINDING ONESELF--that is, they find the person in whom they recognize qualities of themselves.

Perhaps because of this mutual call and response, of this finding of the Oustider and the Outside and No finding oneself, it is possible for the “search” with its inherent drive to “capture” the Ouside to be skipped over and that these recognitions ensure that there is always an outside which is recognized and handed on from one Outsider to another--

Amat is one of the figures of the outside and of the No and one feels very much the attraction, the call of an uncanny recognition, which means more work--learning another language--and willingness to climb into the mountains where the poems are carved . . . like those immense chasm-words and letters carved in the obsidian rock Island in Edgar Allan Poe's “The Narrative of Arthur Gordon Pym, of Nantucket.” And which Robert Smithson thought of as “literally vast potentials for a critical earthworks writing . . .”

So—back to work as it found one-and one found it --
Posted by Jerome Rothenberg at 3:30 AM

Yeat's was more specific and diagnostic I think:

The rhetorician would deceive his neighbors,
The sentimentalist himself; while art
Is but a vision of reality

David Bromwich offers this: "Being deceived is here pretty closely identified with having motives apart from self-reflection--from which a low kind of art will degenerately follow, as rhetoric follows poetry."