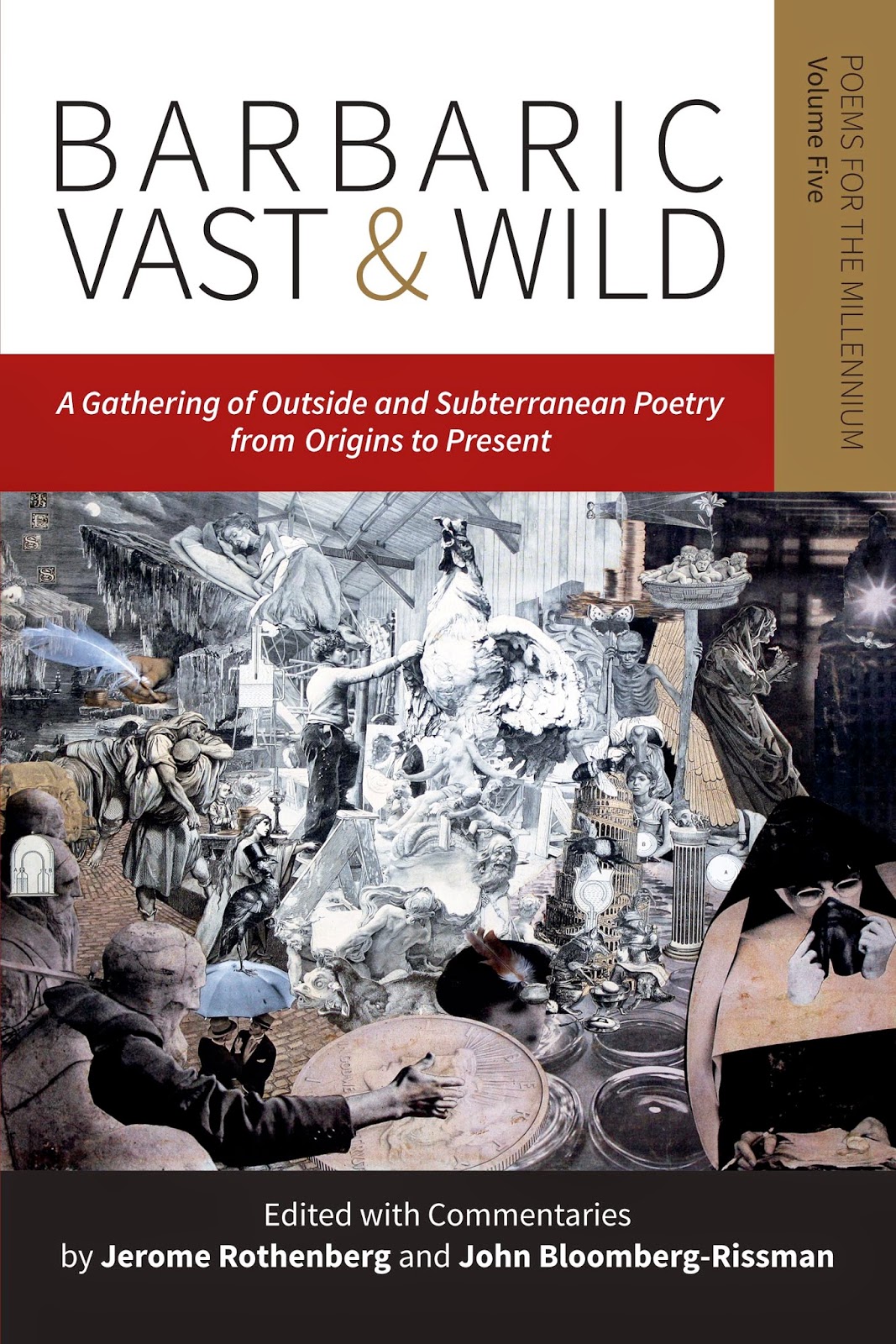 POEMS FOR THE MILLENNIUM, VOLUME 5: Barbaric Vast & Wild: An Assemblage of Outside & Subterranean Poetry from Origins to Present
Edited with commentaries by Jerome Rothenberg and John Bloomberg-Rissman

Barbaric Vast & Wild is a continuation and a possible culmination of the project that began with Jerome Rothenberg's Technicians of the Sacred in 1968 and led to the first four volumes of Poems for the Millennium in the 1990s and 2000s. In this new and equally groundbreaking volume, Rothenberg and John Bloomberg-Rissman have assembled a wide-ranging gathering of poems and related language works, whose outside/outsider and subterranean/subversive positions challenge some of the boundaries to where poetry has been or may be practiced, as well as the form and substance of the poetry itself. It also extends the time frame of the preceding volumes in Poems for the Millennium, hoping to show that, in all places and times, what the dominant culture has taken as poetry has only been part of the story.


Divided into four "books" - Visions, Voices, Extensions, and Performance - Barbaric Vast & Wild brings together on a global and historical scale - from the paleolithic caves to the immediate present - works from the hieratic and sacred to the mundane and the radically transgressive and politically subversive. The range here is enormous: Egyptian pyramid texts, biblical prophecies, pre-Socratic poet-philosophers, Buddhist wanderers and "divine madmen," along with poems and related language works from dialects and "nation languages," thieves' cants and other argots or vernaculars, working class and lumpen poetries, popular and newspaper poetry, sermons and rants, glossolalia and glossographia, slogans, graffiti, private writings (journals and diaries) or semi-private (correspondence, blogs, or social-networkings), and the "art of the insane" (Art Brut) that marked the early turning of avant-garde artists and poets to the idea of an "outside" poetry and art.  The work as a whole may be taken as another step toward what the editors have called an “omnipoetics” and an “anthology of everything.”

Writes Charles Bernstein of this latest addition to Poems for the Millennium:

"Bararic Vast and Wild is the crowning jewel of the Poems for the Millennium series, just that it proposes a deep othering of the entire project, a movement beyond the radically reconceived visionary canon of poetic invention to an unchartered realm beyond any literary canon formation, from Blake's chartered streets to something that proposes a reimaging of the literary in its re-grounding in the uncharted. … The fact is that the mad eclecticism of this anthology is its greatest virtue - it moves in leaps and bounds, like Nijinsky on peyote. It defies any category previously existing and yet as a reader I feel I get it, get it again, and get it over and again, as I am pulled in different directions. In a way, this book works, even more than Rothenberg's other anthologies, as an epic poem - along the lines of a work, as Walter Benjamin imagined, composed just of quotations. The constellation - or set of constellations - is stunning and unexpected - the connections are themselves visionary or outside rational historical plotting. What this does is to make a book magically readable - not a text book, not a succession of cultural touchstones you "ought" to know, but an autonomous reading experience that changes everything page by page.

"Rothenberg, and his co-editor, John Bloomberg-Rissman, now turn their attention to poets who may not have thought of themselves as poets, poems that blur into image and calligraphy, texts that aspire to the condition of disappearance. Various terms for such work come to mind-avant garde, art brut, outsider art, "folk" poetry, "subterranean." … By bringing together texts from heretical religious traditions, inhabitants of mental institutions, folk or isolated cultures and placing them alongside poetry by more canonical poets who were themselves at times estranged or mad makes for a much more diverse, complex way of looking at the meaning of "outsider" art."