Jerome Rothenberg: “The Dreamers, for David Antin,” reprinted from A Seneca Journal with a note in reminiscence 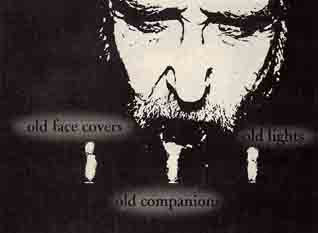 [note.  In the more than six decades of my friendship with David Antin the pleasure of talking & thinking together was foremost, as much where we disagreed as where we agreed, & David & I knew that for any surface differences we had, the underlying impulse was nearly identical & made for a bond that even now fills me with wonder.  I was also keenly aware of his trickster side – as he was, I know, of mine – & never sought to turn him away from it but nearly always relished his thrust toward the unexpected & outrageous. A case in point was a claim of his that began sometime in the seventies & went on for a decade or more thereafter – the assertion, often repeated, that he never dreamed & that he never had dreamed or had first-hand knowledge of what dreams were.  I understood of course what was behind it – much like his rejection of the “imagination” & the “sacred” (otherwise near & dear to me, or imagined as such) – on which I often called him out & which he just as often shook off & persisted.  It was with regard to that, while living on the Allegany Seneca reservation in the early 1970s & writing A Seneca Journal and Shaking the Pumpkin (but also A Big Jewish Book) – that I addressed David in the poem that follows.  Otherwise an exploration of dreams & a dreamer religion & practice among the Senecas, the address that starts it is to David in his condition of fictive dreamlessness, a device of my own that David was the first to embrace.  Some years after that, David, when the time was right, began a magnificent reading or re-reading of Freud & Freud’s dream works, & confessed & described the many dreams to which he himself, for all his past denials, was also susceptible.  And the sentence from the poetic past that we most often repeated to each other, then & always, was from Shakespeare in the voice of Hamlet: “O God, I could be bounded in a nutshell, and count myself a king of infinite space—were it not that I have bad dreams.” Which we carried with us – to the very end.]


for David Antin
1
that couple sitting
in splendor of old houses
Albert Jones & his wife Geneva
were old before my time
he was the last of the Seneca diviners
died 1968
the year we first stayed in Salamanca
with the power to know dreams
“their single divinity” wrote Fremin (S.J.) 1650
as we say “divine”
the deva in us
like a devil
or a divus (deus)
when these old woods were rich with gods
people called powers
they would appear in words
our language hides them
even now
the action of the poem brings them to light
dear David

not in the business man’s
imagination
but asking
“who is Beaver?”
forces them out of the one mind
in mything
mouthing the grains of language
as David that sounds like deva
means beloved
thus every Indian once had a name


“turned upside down”
this is the ceremony at last
there is nothing
before it greater than
the woman at the rim of her own dream
sees a new world below
the air expands
blows against
her legs
its fingers open the dull labia
suddenly aglow
& burning
red with a new promise
the world-child takes root in her
will be a daughter
she be the grandmother to what
is good & bad
walks now in the new
world below her head
like crossing the back of an old turtle
on your hands
in a country where everyone wears feathers
where skin’s like glass
opens a window in her breast      say
from which an Indian
tired from his “show”
stares out
shines at you
a gold tooth
& a terrible top hat
with flags
Posted by Jerome Rothenberg at 4:22 AM