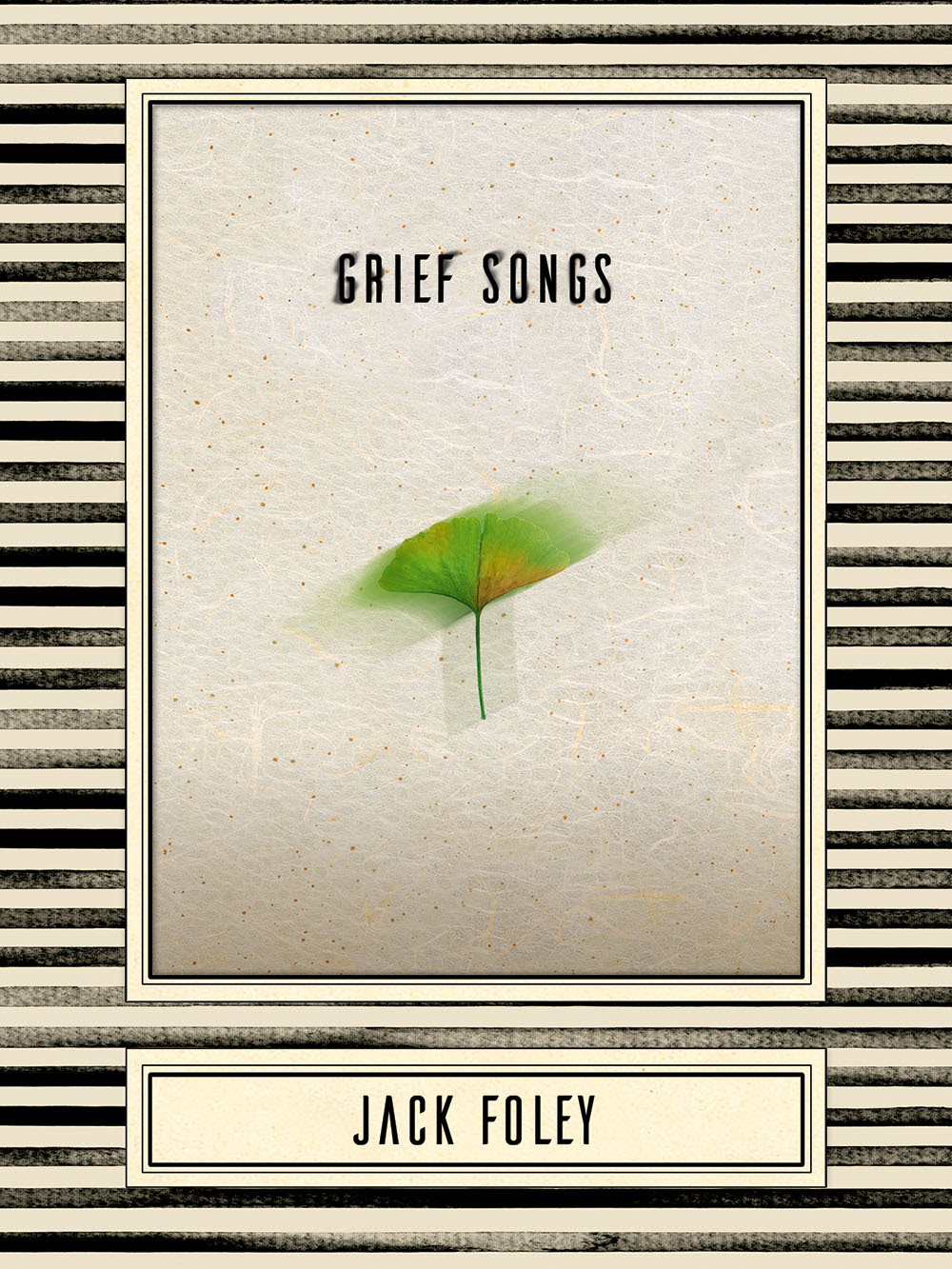 “On June 4th, 2016, poet Jack Foley’s wife, Adelle Foley, who was (as she told her doctor) ‘never sick,’ was diagnosed with stomach cancer; she died on June 27th. They had been married for nearly fifty-five years and were an exceptionally close couple. Adelle was also a poet and, like Jack, had published widely. He wrote about her, ‘How can there be sunlight and you not in it?’
“In the months after her death, with extraordinary courage and directness, Jack opened his heart with a series of poems and letters to his friends, many of whom responded with poems of their own. These documents of intense necessity, brought together, make up the deeply moving collection that is Grief Songs: an expression, certainly, of a year of desperate grief, but more essentially, of a lifetime of love.”

THE DEAD EXIST ON THE OTHER SIDE OF THE MIRROR

What do we do with the dead
And with what the dead left behind
Especially when they left behind so much.
Dead the with do we do what
Behind left dead the what with and
Much so behind left they when especially.
—Jack Foley

I think that, recently, neither
of us
remembered
the date
of our first
meeting
but it was preserved
in a cartoon:
November 18, 1960.
Today,
I sat
in an ice cream shop
with my friends
Paul and Vu
and Vu’s daughter Kaitlin.
I fell silent
uncertain whether
the date were today, November 13
or the next Friday, November 18.
The 18th won out
but I had to wait
until the sweetness and good humor
of my friends had ended.
We parted, smiling.
But tears poured out of me
as soon as I was alone.
I suddenly remembered
the moment when Adelle and I first tongue kissed
in a “date parlor”
in Towson, Maryland
(November 18)
and I began to feel
the love
that will stay with me
till the end of my days

Matthew Fox writes, “One of the most wonderful concepts that Hildegard [von Bingen] gifts us with is a term that I have never found in any other theologian...the word viriditas or greening power” (Illuminations of Hildegard of Bingen). The word suggests “veritas,” truth, as well as “veridicus,” speaking the truth. Wikipedia: “The definition of viriditas or ‘greenness’ is an earthly expression of the heavenly in an integrity that overcomes dualisms. This greenness or power of life appears frequently in Hildegard’s works.”

Some years ago, Poetry Flash editor Joyce Jenkins challenged me to “write a nature poem” for her Watershed event. I found my mind returning to Kore / Persephone, especially to her aspect as seed, thrust underground but emerging to flower. I remembered as well W.C. Williams’ poem, “Of Asphodel, That Greeny Flower” and Denise Levertov’s book of nature poems, The Life Around Us. Adelle was diagnosed with cancer on Saturday, June 4, 2016. I told her doctor, “We want to keep her.” Adelle chimed in, “I want to be kept.” The doctor remarked that Adelle was “taking the news well.” She then asked, “What about him?”—me. Adelle answered, accurately, “A little less well.”

I read “Viriditas” to Adelle shortly before her death.

Viriditas—
the dream
of a green
world

it is not possible
to be
apart
from
nature
(“natura naturans”)

I am that flower
you hold
in your
hand

what is mind
but light?
what is body?

“Make LIGHT of it,”
writes my friend
James
Broughton—

Walking,
I vanish into light—

time vanishes/returns    we grow
in branch and root
in winged or finny stuff
or cloven hoof
in bird-
sound, animal alarm or
pleasure
(describe a scene—
scene vanishes—
mind appears—)

greenness, love:
as you lie in this moment
of danger,
as you sleep
wondering if the next sleep
will be death,
“this greeny flower,”
this green
comes to you
the power of life
Viriditas

What you discover in such a situation
is what Rousseau called
le néant des choses humaines
the nothingness of human affairs
Adelle’s concerns—the laundry, our finances,
her plants, dinner, people at AC Transit, people
in the local community, poetry people, whether
I parked the car close enough to the curb,
her VISA card, the Toyota, her haiku, the goldfish, me,
the light in the leaves as she passed by in the morning,
credit cards, J.R.R. Tolkien, Octavia Butler, Miss Fisher’s Murder
Mysteries, the egrets at Lake Merritt,
the homeless on her way to AC Transit
(to whom she gave money and boxes of raisins),
her son and daughter in law,
hundreds of others
in a complex web of caring—
all disappeared poof in a few moments
on the afternoon of June 25, 2016
in a Kaiser hospital room
when she fainted in “septic shock” and her dear heart stopped.
Suddenly, all of that was gone
as if it never existed
le néant des choses humaines
I remember it, some of it—even most of it—but for her
it’s a spider web someone brushed off a window—
gone.
It is this that we make poems and stories and beautiful lies
to avoid:
this sudden view
when a long-loved, long-known, long-accepted person dies
& we see it
deep and clear

It’s your birthday
My dear, dead love
I had begun a birthday poem
My wife
My life
And had already bought some gifts for you
A Monday—Moon Day
“Looney” in our Dellwackian fantasy
Who paired with the tiny sun,
“Salvador Dully”
You made a cartoon for me
Eight days before your death
(Six before the day
You forever lost consciousness)
I am trying to find
Another life to fit me
But what could ever fit me
So well as the life we made
As Moon and Sun
As Dell Dell and Jack Wack
As the EEE Monster
And the DDD Monster
As all the phantasmagoria
That rose out of our love,
That kept our love
Forever alive:
They never stopped loving
Even when you and I faltered
They wondered why Dellwackia
Suddenly looked
Like a hospital room.
I’ve cooked dinner for you tonight
Polpette, purpettes,
A meal you loved
That came from my mother’s
Long Calabrese line.
Dear friends will join me
And then we’ll watch
A favorite film:
Hitchcock’s Foreign Correspondent
Looney and Salvador Dully
Will watch it too
And Dell Dell and Jack Wack
And the Monsters.
Everyone loves
The poems I’ve been writing
About your death
You were always my Muse
And today is the birthday
You could not celebrate.
Our love remains
In all these figures
In all these words
While you
Whirl through the universe
(If such things are true)
Forgetting birth and death
Forgetting Dellwackia and me
Remembering only
The deep configurations
Of Life and Love.

[The names mentioned are cartoon characters in a joint fantasy that Adelle and I maintained for years. We drew pictures for each other and gave the characters voices. She was Dell Dell—a name her father gave to her when she was a child. I, “J.W. Foley,” was Jack Wack. The DDD Monster and the EEE Monster, etc. all figured into this fantasy, which took place in a country named for the queen and king: Dellwackia. We had a ritual for turning out the bedroom lights at night. The Dellwackians didn’t understand electricity but they would all gather and in their various voices “blow out the candle.” After the lights were out, I would say, “’Night, Dell.” She would answer, “’Night, Wack.” The lights are still on in our bedroom.]

It is
What the Jews call Yahrzeit,
A year since your death.
The word stings.
If you retain any consciousness of the world
You know
That I have found a new love.
She has been
A wonder and a comfort
In my grief for you.
I think you would have liked her
(And mothered her!).
Going through your dresser drawer
As we attempt to find room for her things,
She found
A fancy, almost comically sexy garter.
I had forgotten it
But recognized it immediately.
You wore it only once,
On the night of December 21, 1961,
Our wedding night;
You kept it, as you kept many other things, for all these years.
How we formed each other.
How we treasured each other’s hearts.
If the stories are true,
You may be in bliss
While I find my way through this quivering wall of sorrow and tears.
And love.
My first love, my dear first love,
It has been a year
(Has it been a year?),
Yahrzeit.

Your ashes
Remain     in the vanishing morning light.