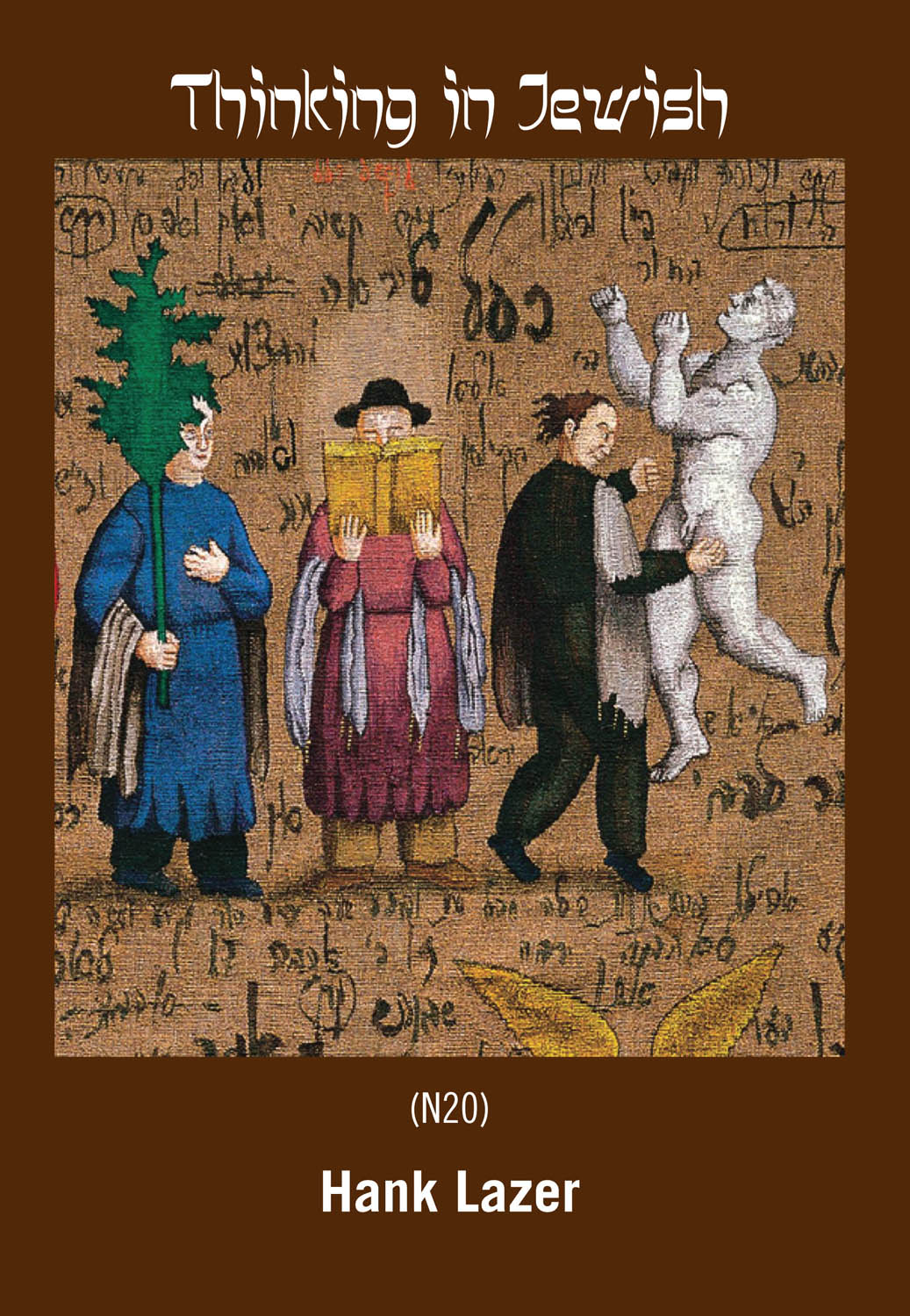 Lazer’s praxis performs, in projected transcendent fragmented potentials, the stakes of a modern translingual jewish poetics that is both wholly contemporary, and yet elementally steeped in a thinking far older than capital J Judaism proper.

The philosophical questions Lazer raises in his book, Thinking in Jewish, in particular, via polyvocal glosses throughout – in many cases, shattered exegetical echoes between himself and Emmanuel Levinas – appear to me as radical specters of a hidden jewish past/future, which emerges in the world today as holy sparks restoked in the breath of poetry.

Lazer’s book provides no siddur [prayer book], nor seder [order], to the reader, but sits like a mongrel-bodhisattva at a shabes tish [table]: gathering across and under the ecstatic musics of relation, in which effervescence flows between subterranean interwoven vessels: “for all the streams return to the streams,” as Avot Yeshurun writes, mistranslating Ecclesiastes.

Hand-writing poems in wild mazing shapes projected across the page, Lazer enacts a wide poethical weave, an act that becomes in its own impossible duration, a radical mode of meditation and mediation, a means of engaging one’s own inner- and also inter-resonances in relation to the vast unknown. 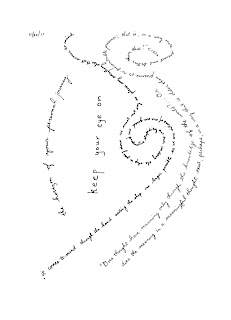 In order to read Lazer’s shape-writing, we must quite literally turn the page in our hands: an act of turning so viscerally incomplete in the sense of arriving anywhere, calling out to the unknown, the experience of reading as a spiraling outward reach at each subsequent turn.

And with each turn turns as a further accent to the space of no-return (diaspora), so said, a people in space turned by language into place thru translational portals:

I have never been trusting of a seder, per say, but in a table, would trust my life.

It is not a question of trust but a question of doubt, in this case; the improvisational jewish impulse to look back over one’s shoulder, to crane one’s neck once more, again and again upon departure, recording every glance for the chance to breathe upon the bygone holy spark.

There is no way to read Thinking in Jewish just once, I think; the experience of reading one of Lazer’s shape-poems is already made multiple from the get-go, the feeling, in reading a single spiraling line, as though one has just read a full book, which necessitates multiple readings, turned and turned into a tuning.

Thinking in Jewish works in an expanded yiddish dialect/ic of everyday jewish thought, as fusion futures shine-up from the curves of shapely flexible lines.

But the elemental formal quality of Lazer’s shape-writing in Thinking in Jewish, it’s visual-contextual architexture – that is, the shape he writes it in(to), which is the writing itself – makes it impossible to explain these poems in any genuine or ethical sense, outside the experience of actually reading them ourselves; and so I avoid that form of analytical explication entirely and intentionally here, merely passing over the texts as one might over holy texts, if one believed in such things: avoiding the harvest in protest of more normative oppressive schools of exegesis. In disparate gestures of tuning our shared shattered vessels toward some speculative wholeness, turning to crane our necks and –

[N.B.  Lazer’s Thinking in Jewish was published in 2017 by Lavender Ink / Diálogos, for which full information can be found at https://www.lavenderink.org/site/shop/thinking-in-jewish-n20/?v=76cb0a18730b.]

Posted by Jerome Rothenberg at 5:59 AM