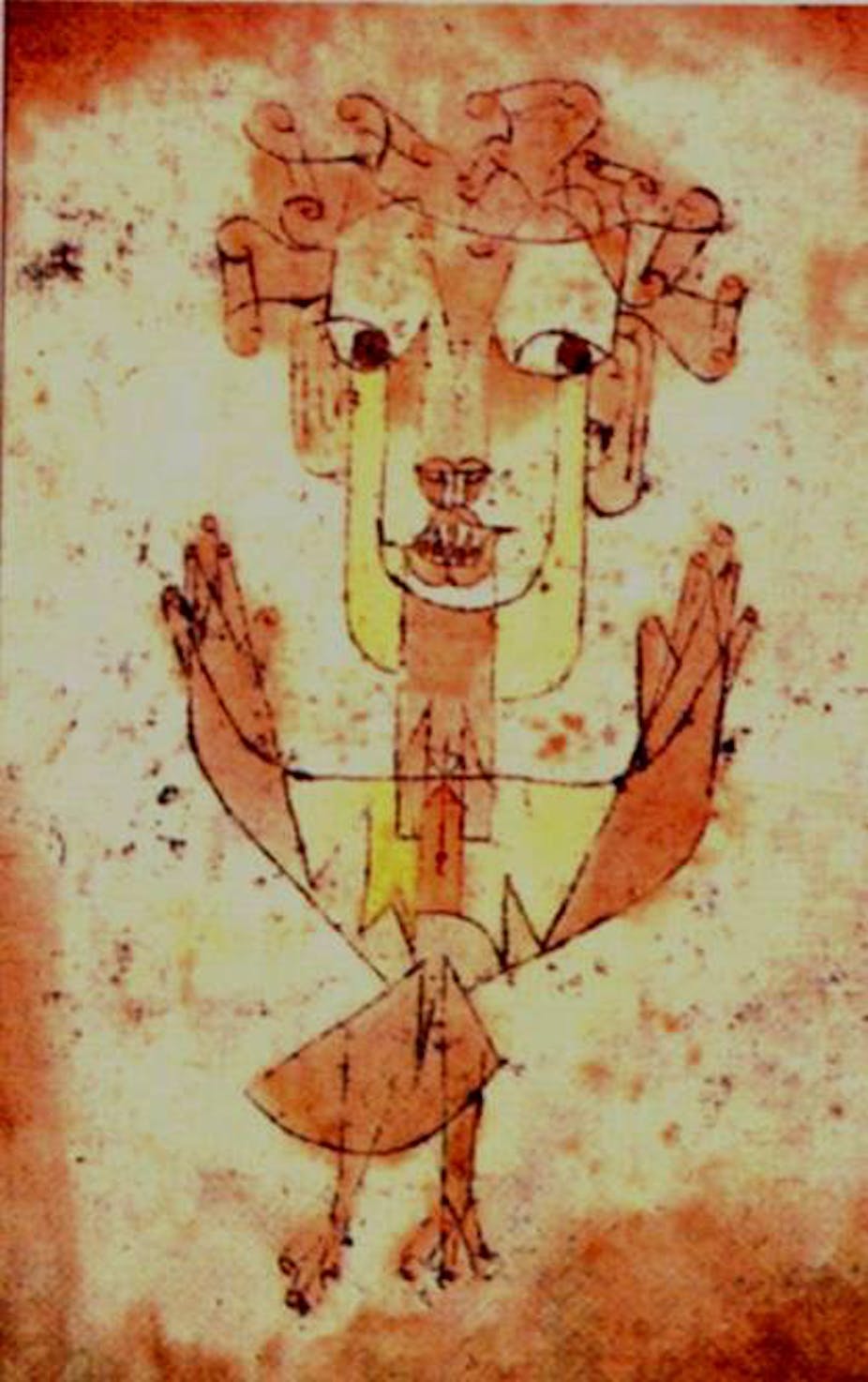 of its doubled halftone self.

Its face is a scroll, or maybe a lion

You'd think, given strength and virtue,

But its animal eyes fly to the side,

This is your body on fear.

This is your body on dread.

Eyes pop out of its head.

Though it shudders, it is fixed.

at the wrong ends

There is a painting by Klee called Angelus Novus. It shows an angel who seems about to move away from something he stares at. His eyes are wide, his mouth is open, his wings are spread. This is how the angel of history must look. His face is turned toward the past. Where a chain of events appears before us, he sees one single catastrophe, which keeps piling wreckage upon wreckage and hurls it at his feet. The angel would like to stay, awaken the dead, and make whole what has been smashed. But a storm is blowing from Paradise and has got caught in his wings; it is so strong that the angel can no longer close them. This storm drives him irresistibly into the future to which his back is turned, while the pile of debris before him grows toward the sky. What we call progress is this storm.

To ask which way

the wind is blowing

This says it’s from a “Paradise”

suctioning backward to the future.

To ask in what way

its wings will ever close

is not another joke.

in the same quarter

(in front of it) as Paradise.

What dreck is coming from the blast?

Will the future be the same

as this wrecked past?

4. Some questions, some answers

What does have the power? A storm.

A Power Surge. From whence? From

Paradise! And where is Paradise? Yes--ask!

is it coming in the future, or lurking in the past?

Is “Paradise” the goal before us

or the theological back?

The messianic Will says “Paradise” (glimmer)

is coming forth, full monty futurial.

While Paradise was (cue glittery shimmer)

once angels' home, this Paradise

is modern and gives rise to storms.

It's not a place of peace, but turbulence.

How can this be? Is every image wrong?

Is Paradise Malign? Is Angel Powerless?

Are these names obsolete, flat, functionless?

We seize up, freeze up: thesis, antithesis,

Why does this angel have fewer powers than us?

We perceive a "chain of events." It perceives "debris."

We project a narrative linkage.

Why is the wreckage apparently invisible?

I mean: not rendered in this scene.

Did everything shift in the twisting swirl

of a funhouse twirl called “history”?

In the realm of angels, is there no logic, no cause

and effect, nothing syllogistic? Is the answer “yes, not”?

How to imagine the motives of any angels;

then how do these get thwarted? And by what?

to institute justice by heavenly fission.

Nonetheless, it is doomed to hover

paralyzed inside this ever-darkening loss:

which is--Whatever Comes when winds

from so-called Paradise double their Force.

This thing is not a picture exactly,

It is one monoprint, unrepeatable.

Mainly not to illustrate

but to parallel us and travel together.

These glyphs are flat as forms of fate.

barely having time to leave

The stakes that high.

Almost unrepresentable is everything.

that Benjamin’s glyph--taken from Klee--

is "illogical." If you can’t represent this,

you just can’t. But there’s the joke.

stuck in the throat.

So what's to say in face of all this?

but enough after all,

enough to be unbearable.

tightens. Can the "right"

words get gasped out?

on the shard pile testify.

My vocabulary didn't do anything

in the way of killing me.

It was the findings.

I have seen an incandescent lightbulb that had angel wings wired on it—and it was “Style”--pretty pricey--a designer fixture. Cute. A plain old lightbulb, and some white feathers. Almost a cartoon.  But it was true.

Do angels have money? Hold it; that wasn't the question. But I couldn’t read my scribble. This was it: "Do angels have memory?" Just a note, straight out of Dante. The desire for brightness and luminosity, compared with our diurnality. They don’t go into our darkness? Except when given a mission. And then they never stay.

But who really cares about "angels" except you've just spent a few hours in yet another museum. Although it is nice to see them wander around the world in the imagination of various cultures--those pretty and elegant androgynes whose feathery wings are sometimes covered with eyes. If they had that many eyes--and all those rainbow stripes, they probably don't need either memory or money.

They simply give the message they have been given. Someone tweeted: Don't bomb Syria; glitter-bomb Russia.  Do you remember this? It was a specific moment.

Plus I just learned about mica. It's mined almost exclusively by children twelve and under. In India. And often mined illegally. Where does this leave us? Or actually, in our part of this, our collective world: where does it leave anyone?

We live amid documents

a new batch every day, vital

of what we are seeing.

Hence a poetry not solely

“poetry”—do I have to spell

We are on energy alert,

but on a short fuse for qwik illumination

so then the poles

swerve to depression with disgust,

swerve back, practically electrocuted with despair

Our angel was once rooted in its clarity of purpose

and grew in light

but that brand of angel declined,

was withdrawn from the market,

ripped from its root,

of shifting soil and in straining winds.

Thus the angel found itself

deep flung across the place once home.

It got worn, raggedy and frightened,

and so it looked

A project is a desire, altering

itself as it goes, shadowing

the names it thought it had, tracing

the words behind the words

which are the only ways to know.

To live among quotations makes

everything exegesis, which ennobles solemnity and

One pitches down the incline of the scroll.

Interpretation is a mode of clarity,

We live in nomadic

Therefore I am the philologist of the trace

and I am not I

To read trace is violation;

not to read disvalidates whatever the mark might give.

We stare at the plethora of texts.

The trace is a smudge of flattened historical time.

the hard-to-clean grease of endlessly

Or "challenged" to breaking.

thrown off by cataclysm

lying among those broken parts

and speaking in the voices of the dead

What is beyond that sublime?

Something. For which there is no

genre, but swiveling pressures on words

blowing and blasted at every turn

The time of now is palpable; it is the source.

is it possible to vow?

To gather up our nothingness as force,

to enter the dark tunnel of our time once more.

[N.B. As a master of the multi-volume long poem, one of Rachel Blau DuPlessis’s motifs, she tells us, is “making a commentary in a poem that glosses key modernist texts in suspicion and homage.” In her recent book Late Work (Black Square Editions, 2020), the poem “Angelus Novus” examines, “with contemporary panache,” the Walter Benjamin / Paul Klee image (above) of the “angel of history.” Elsewhere, in “Draft 52: Midrash,” (in one of the books of her earlier Drafts), the text under question is by Theodor Adorno about the pitfalls of writing poetry after Auschwitz, “This project,” she writes further, “is the work of the prodigal daughter in internal exile pursuing incomplete enlightenment in poetry.”]

Posted by Jerome Rothenberg at 6:02 AM