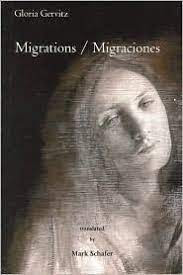 Translated from Spanish by Mark Schafer

[In the wake of her recent death and in celebration of her great masterwork, Migrations, the following is an extended & modified version of her entry in the forthcoming historical anthology of North & South American poetry (“from origins to present”) co-edited by me & Javier Taboada and scheduled for publication next year by University of California Press.  The latest full version of Mark Schafer’s translation, Migrations: Poem 1976-2020 (with amended title and cover), was published last year by New York Review Books. (j.r.)]

beneath the summer-drenched willow only restlessness lingers

the unscreened porches
fever growing red in other skies
the gleaming verandas darkening with the acacias
and in the kitchen the newly washed dishes
fruit and syrups
in the swell of rivers
in the night of willows
in the washbasins of dreams
in that steam of female viscera
rising unmistakable and expansive
I leave you my death entire complete
my whole death for you
to whom does one speak before dying?
where are you?
where in me can I invent you?

and my nanny sound asleep in the hammock nearby

and the house submerging in drowsiness

and in the plaza the market starts to bustle with activity

and rice milk and hibiscus tea and tamarind water

and sweet tamales and Oaxacan tamales

and papayas and plums and Manila mangoes

and purple bananas and plantains

and the heat entering the palm mats

and the red buckets of shrimp

and the red rock crab legs

the bundles of freshwater crabs the mackerel for ceviche

and the clams partly opened and altogether stunned

the flaccid octopuses fainting in their ink

the oysters dreaming they’re at the bottom of the sea

the tiny oysters small as pebbles from the river

the white pompanos from Michoacán

the fresh and saltwater trout

the translucent jack fish and the sea bass

and the carp from Morelos and the scallops

and the charales their heads smashed

and the shark fins

and the heat  wings crashing

smashing them in the bougainvilleas

and lovage for the birds and the radishes

and clusters of loquats and ears of corn

and the canary seed and amaranth

and sacks of millet and beans

and baskets brimming with chili peppers

and the pequin so tiny and hot and the habaneros

and poblano and sesame seeds for every kind of mole

and Oaxacan string cheese wound like balls of yarn

and manchego for quesadillas

and corn tlayudas and tlacoyos and mortars and metates for grinding

and braziers and palm leaf fans

and shawls from Santa María hanging in the stone arcades

guayaberas and blouses made of linen from the maguey tree

openwork embroidery from the nuns in Aguascalientes

and butterflies and angels and agate and onyx and ebony

and periwinkles and ornamental combs of mother-of-pearl and tortoiseshell

and soaps made of almonds and rose petals and oatmeal

and coconut and chamomile

and the overheated heat blazing with Celsius

plunging into the sweet breads the conchas and cuernos

and myrtle candies and quince and guava jellies

and rolling tobacco and vanilla from Papantla and cinnamon sticks

and swallows swinging on strands of light

and filaments of heat dangling

and arnica and rue and aloe leaves

and etherium capsules and bunches of eucalyptus leaves

and basil and myrtle and white lágrimas

and glorias for the altars

and miraculous medallions and scapulars

and amulets to ward off the evil eye

and sticks of incense and crystalized copal

and a riot of voices

and birds full of cages

and cages of parakeets with clipped wings

and the church bells calling the faithful to mass

and music here and music there

and flocks of lorikeets

and mockingbirds from other landscapes and other memories

and the protracted trill of yellow canaries

and the organ grinder cranking the handle around and around

and cranking out the same old hurdy-gurdy tune

and a violin sad and lean

and a daydreaming guitar

and an out-of-tune trio singing:

(1)  Worked on from 1976 & up to 2020, Gloria Gervitz's masterwork Migrations is an epic of the migratory self. Like Pound’s Cantos or Zukofsky’s “A”, hers is the work of a lifetime: a life’s work including not only autobiography & familial memories as a kind of history but rife with sexual, religious & mystical imagery taken from different sources: from Jewish kabbala to Mexican folk Catholicism & beyond.

(2)  Writes Mark Schlafer, translator, after her death: “At the beginning of Gloria Gervitz’s 261-page poem, which she composed over 44 years, she writes: ‘I leave you my death entire complete / my whole death for you / to whom does one speak before dying?’ In the context of the poem, Gervitz seems to be addressing a version of her mother or grandmother. But given her death on April 19, she now also addresses us, her readers. Except that—paradoxically, ironically, or both—we must now intervene as reader-writers of the text, replacing ‘death’ with ‘life.’ Death and life, the possibilities of the present and memories of the past, stasis and ecstasy, silence and song, the blank page and the printed word are all in a constant dance in Migrations. But now, at last, the author is silent and her song is done. And still, every time we open Migrations and begin to read, whether in the original Spanish or in one of more than a dozen translations into as many languages, we, her readers, lower the needle of our eyes to the record groove of her poem, and her music once again begins to play: ‘music here and music there/ and flocks of lorikeets / and mockingbirds from other landscapes and other memories’”.

Posted by Jerome Rothenberg at 2:00 PM