From A Book of Americas (in progress): The Collective Amereida Poem, translated by Javier Taboada, with commentary attached 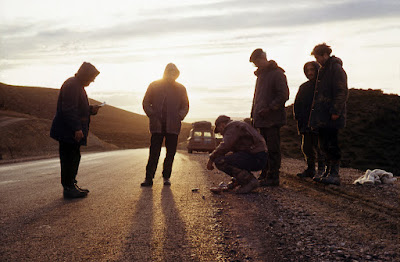 the journey reaches its height

wouldn't it reveal in the flesh

to start off a language?

all the roads into our intimacy

though they lead us

are a distortion & a trick

still beating after all imitation

which claims for a continent

& embraces us within its stars

where do we get the names

of the american discovery?

in what void were they born?

sent him to be sacrificed

& since he was a stutterer

& his name was juan

& it was the day of san juan

– & when he was saying that

in his own tongue

ye come to mine house

& that is why we named

& that is how it shows up on the nautical charts

they asked them about the name

of a big town

I don't understand you

but the spaniards thought

that was its name

the word since then

they called the place

& that name 'll never fade away

if ye ask me for mine name

my name is beru

but if ye ask me where I was

I was on the river

christians grasp what they wanted     thinking

so america burst and came into a transition

that's its origin – to be in transition

civilization     but in a present transition

present is just what has a destiny

destiny is just fidelity to the origin

as the gospel's rebukes

since the beginning of time

& that's why we feel here

a new era of history

everything relies on the comprehension of this line of Hölderlin–

whose gifts or talents allow us to come to an end

the poet is the giver

stiften is not to found   damnit! it is

to tune our dwelling in its own rhythm

to give the frame then the starting

shot giving money is a

what will the amerodyssey give? 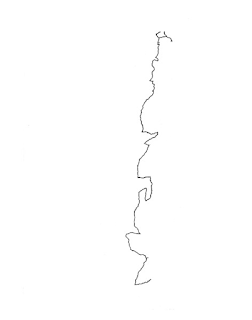 the road isn't the road

Translated from Spanish by Javier Taboada

(1) Travesía was the name of a sea journey made by architects, philosophers, poets & visual artists -- Latin-American & European -- such as Edison Simons, Jonathan Boulting, Alberto Cruz, Fabio Cruz, Michel Deguy, François Fédier, Claudio Girola, Godofredo Iommi, Gerardo Mello Mourão, Jorge Pérez Román, & Henri Tronquoy -- whose main goal was to found an "American Poetical Capital" in Santa Cruz de la Paz, Bolivia. The journey shipped off from Tierra del Fuego, in 1965. During the trip, the crew members landed at different points in South America & there they performed artistic actions, none of them premeditated.  They couldn't however reach Santa Cruz: they were stopped by the Bolivian Army & were forced to quit. In 1967, the members of Travesía reunited & created Amereida (translated here as Amerodyssey) -- a collective long poem without any evident authorship or capital letters -- that reenacts & goes deep into their experience. Other Travesías followed up to the present time. While the "Poetical Capital" was never established, their idea shaped the foundation (in 1971) of Ciudad Abierta [Open City] in Chile, an architecturally revolutionary & experimentally designed city, supported by the Catholic University of Valparaíso

(2) The route sketched here moves from southernmost Tierra del Fuego (shown on top) to Santa Cruz in Bolivia (at bottom).  Of this inverted route they write: "it’s america seen from earth! / from below or otherwise / where dante comes from & the dead are."

(3) The preceding will appear next year in A Book of Americas: Toward a Poetry & Poetics of the Americas, from Origins to Present, co-edited by J,R, with Javier Taboada & published by University of California Press.


Posted by Jerome Rothenberg at 6:06 AM