Alberto Blanco: Three Theories from The Square Root of Heaven

please note. a list of postings after january 12, 2012 can be found here 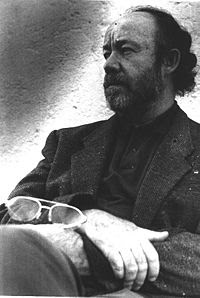 
Problems aren't resolved,
they only occupy less and less space.
Problems are real, but they have limits.
Problems don't grow,
what grows is the consciousness of being,
one's vision.


Problems change shape constantly.
Vision does not; it always keeps
the same shape,
but it does change in size.

That's why it is correct to say
that only error changes,
as it is also certain
that vision is totally fluid
and that there's a terrible wind out there
and that its capacity for transformation is amazing.


Radiated heat – in a camp fire
as well as in the atomic explosions at the center of the sun –
is not a continuous flow:
it's more like the beating of the heart
than the slow running of a river,
because radiation proceeds by quantum leaps.


The fact that in physics
whole numbers have been assigned
to each one of these leaps,
and that in different traditions
there exist initiation rituals for each passage,
in no way alters the basic phenomenon.


The circles in clear water
move outward from the stone that falls into it
but the depth of the pond remains unaltered.


The heart pulses in leaps
but the circulation of the blood
is one continuous reality.


At one time it was thought that electrons
were like planets gyrating around a nucleus
–a central sun– and that along with their movement and
velocity
there was a corresponding orbit, naturally.


Nevertheless –to our great surprise–
quantum theory proposed that electrons
in spite of their movement, velocity, etc.,
do not orbit! How is this possible?


If we observe a hydrogen atom (the simplest of all)
through the electron microscope
we will see that the light of the instrument itself
stimulates its only electron to absorb energy,
become excited, and leave its orbit ...
and we will never know that other orbit.


Quantum theory proposes
–as opposed to classic mechanics–
that movement can exist
without a trajectory, without a journey, without an orbit.


At least without a known path,
and –what is more important–
without a path that can be known.


Is this not poetry?


Heisenberg discovered
that a researcher
peering through a microscope
—whether realizing it or not—
is part of the experiment
that he is undertaking
because the same light
that he uses to observe
what is happening
in the experiment
fundamentally alters
the arrangement of what he sees.


This is exactly what happens
when parents want to know
how their children behave
in the company of other children
when they are not there.


If the parents show up,
the form of interaction
changes immediately.


A train at rest is not the same
as a bullet train
gliding on the rails
at full speed.


This is evident.
Velocity changes
the conditions of an object.


When we speak of speeds
close to that of light
that rule and direct
the movements of the atoms
and the subatomic particles,
we are speaking of a separate reality:


An unthinkable world
where not only are
"objects” modified
—if the expression fits—
until they cease to be so,
but the same laws
that govern nature are others:
they have nothing to do with “common sense."


So, Heisenberg’s law of uncertainty
tells us that we cannot know
—from a subatomic particle—
its position or its velocity
at the same time:
if we know its velocity,
we do not know where it is and vice-versa.


The same thing happens in literature.
An immobile critique, an erudite essay,
a stagnant report is not the same …
as a poem
that unfolds at high speed


Poems are quick as quick can be …


We cannot know
—at once—
their form and their content.


And if we know the form of a poem
we will never know exactly
what it says.


note. An increasingly significant voice in Mexican & Latin American poetry, Blanco crosses boundaries between poetry as such & his other works as musician, artist, essayist, & translator.  Of his attempts, as here, to keep viable the relation between poetry & science he writes: “Having been trained as a Chemist, it is not a surprise that I have always been tempted by the poetic possibilities of scientific imagination. Which is a way to speak of the poetics of science. Because, in the long run, both poetry and science work with metaphors of the world. I am not saying that, ultimately, they are the same thing (anyway, what does ‘ultimately’ mean?). Science deals with numbers and measurable realities: quantity. Poetry –as all art does– deals with quality and the unmeasurable. But both endeavors deal with the unknown. The Square Root of Heaven is a series of scientific poems (you can add quotes if you like … ‘scientific poems’) dedicated to different aspects of the unknown. The central part of the book is a series of Theories, like the three included here. And, although these Theories have been translated into many languages and have been published in magazines and anthologies, there is not a whole book of scientific poems published yet. Not even in Spanish. So these poems are waiting in the wings for the right publisher to make it happen.”
An earlier work in English, Dawn of the Senses, was published in 1995 by City Lights Books, and A Cage of Transparent Words, was published in 2007 by The Bitter Oleander Press.
Posted by Jerome Rothenberg at 6:38 AM