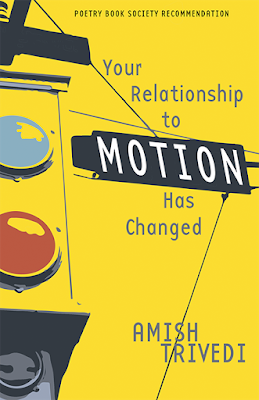 [Six prose poems previously published in Kenyon Review Online (January 2015) which will be in Amish Trivedi’s new book from Shearsman, out in January 2019. The title poem of Your Relationship to Motion Has Changed originally appeared in Omni-Verse in 2012.]

One more nightmare and I’m out. I seem to remember you dancing
while holding your arm bent back and tensing. Another dream of child
rearing and another about falling down into the gravel and being picked
up, only to be dropped again. I’ve said this before and I’ve said it before.

Ownership
Sometimes, the revolution starts in the yard, but ends in the main
house. What wasn’t tied down floated back out into the middle of the
sea and is a possession gained. If we’re counting again, please consider
my placement of your fingers the first derangement. The other parts of
ammunition are made of words and we know how to fire them at
each other.

Once language goes beyond understanding what we see, we can create
new things based on words we want to use. Our brains grew stronger
because we figured out how to boil water and language came from
complex carbohydrates. If there were a limit to things going wrong,
we’d have to learn new math. If we were to believe all words we hear,
we’re likely to forget what we knew before our language came to
take us over.

Your relationship to language has melted down around your ankles
and your toes are soaking in words you’ve built up. Too much time
wasted in front of news that seems to echo only the worst things of
our time. We were made for revolution, true, but we have to step
back at times. When the riot comes, they’ll find you anywhere you
are or are not, so don’t be anywhere at all.

I always required motion to keep sleep away from me, though now I
regret having missed so much of it. Regret is part of an average life, no
doubt, but I seem to have more than most. I should have never lifted
my fingers to your skin or seen the inside of your mouth lit up. What
we had was a momentary escape to eyes but should never have been
a practiced, played, series.

This is the last building I’ll see and the last words I’ll read, but I’m never
as far from them as I imagine. We used to sit away from it all and pretend
that silence was what held us, but now the empty space seems more
meaningful than your words ever did. Let me step beyond and see a new
design of my choosing. As if made up sounds had some bearing, I squeak
to say my name now because it has no meaning that I can defend. My
words are yours now and I have no tones to borrow from and call my own. All
I have left is a glance that no one sees and a sigh which fits in my chest tightly.

Your Relationship to Motion Has Changed

Having nowhere to go
is the best place to be: I

continue to flood. After all terrors,
settled moments have left to

head towards nothing. Welcome to
mediocrity: we’ve had a table

with a broken leg for you
all along. As another immolation

who had heart attacks
in their 80s

surrounded by their families. Ev-
entually you have to accept

that things you knew
about motion are long since

as damage, resting on benches and
in middles of streets. Days of

wishing we hadn’t woken up
have returned to us, having let us go

long enough to know
we would come back. What we knew

about friction has
dragged us quietly back. You can

tell me but I feel nothing changes
by will: only trauma

brings crisis to boil. What we can do
is reach back away from the abyss

and pretend it can’t grab us
by our ankles and

for what they are: atoms
spinning and twisting

to cover void-made
static. What has never been

is an idea that fire
can tie people to land. Say

you’ll become refreshed and
air has never felt so light,

but don’t tell me surroundings
will remain unblemished: as we breathe

on them, their cells will over grow
and consume all atomic

variables. Bring your knees
up to my chest

and press monoxide
into the room: we can see

it escape and be trapped
by walls that hold us

here too. When we pass through,
we’ll be able to see how suns

arced behind us
and brought vision

into this space. I need
another reason

to keep my
diaphragm

from ceasing and becoming
diluted or there is no impetus

to expect neurons
will receive desires

of a body for motion. What
you knew of matter

has dissolved and a new reaction
is to be conjured. I brought

to flood the room. Nothing
we can see exists

when we close our eyes,
only freedom to imagine

an empty chair or a
strand of hair

choking all intakes. I thought I
knew everything

about fear, but it seems there is
more to be mastered if silence

can be buried up to its neck. Physics
is the study of time

being replaced
with nothingness and

encrypted. We cannot gather
all coefficients, but we can

divide series into light
and metaphor. All words

needing to be spoken
are spoken today. Our fingers

our hands and mouths
until every gesture

becomes an act, every utterance
an off-stage cue. Whatever

hard route we come up with,
it’s because we imagine

being jostled to be worse
than time wasted. I don’t

understand how you
justify your movements,

but I know your
relationship to light

has been redefined
to meet expectations

you’ve created: it must
always be present

in order to be used; it must
always be hot enough

to burn any fingerprints
away. We cannot

remove ourselves
from distance, but provide

a new version of force: we must
begin from a state of rest. Deforming

at higher altitudes is not
uncommon, barely visible

if glass is curved
to a certain angle, but a desire which

can become overwhelming
if not observed correctly. What

moving forward is
can be defined in equations,

but we cannot express
locationality in numbers,

just skin temperatures. As hues
of a cheek change, so does

will and freedom
from shattered cells: we become

spacial reference
when our bodies

finally go. On my mind
is a quiet afternoon

spent seeing designs
of an ideal life, a second

made of debris left
from other moments. I can

hear wind in the trees
turning, my arms falling slack

and cold. When all other
failed gasps appear, we can

take momentum along
to carry our burdens. What I

cannot see is how
tiny fragments of bone

can become cancer or how,
as division takes place, skin cracks

and falls. It won’t be said
by the end, but we were

never as happy
as we were on

night one. As reaction times
change, so too does

delivery of endorphins
across my hands,

which are chopped
and frayed. If love is a

bitch, then being
forever alone is a

ways around to keep it
interesting and so we’re

not reliving tremors over
again. Again, to be consistent

with emotion is to say variation
is inhuman. I can put my

head back when I want and
pretend I never knew

language could play this way,
but no one ever believes me. We

cannot ask to be brought
anywhere, but we can hope

to be somewhere. Nothing builds
to any resolution: it is just a desire

to complete words or ideas,
but ultimately, we go

nowhere all the time.
Posted by Jerome Rothenberg at 12:00 PM