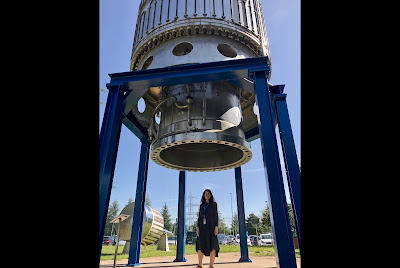 Amy Catanzano at CERN under the Big European Bubble Chamber in the garden of decommissioned experiments, 2019. For this second visit, she was sponsored as a research artist and funded by the Outreach office of the ATLAS Experiment at the Large Hadron Collider. Catanzano has been awarded funding by Wake Forest University and CERN for a third visit to pursue collaborative projects.

2009 EDITOR’S NOTE. As is true in many cases, Catanzano’s poetics exists side by side with her poems in which the intersection between poetry & science plays itself out in a contemporary, even futuristic form. The key work at present is her Multiversal (Fordham University Press, 2009), of which Michael Palmer writes by way of introduction: “Amy Catanzano offers us a poetic vision of multiple orders and multiple forms, of a fluid time set loose from linearity and an open space that is motile and multidimensional. The work exists at once in a future-past and in a variety of temporal modes. … In a time of displacement such as ours, she seems to say, in place of ‘universals’ we must imagine ‘multiversals,’ in place of the fixed, the metamorphic. … ‘A blaze within a tighter blaze, engulfed.’ ‘Earth pivots on a pearl.’” For a further take on the poetry-science connection as it first came into a radical poetics, check out the posting here on Goethe, Shelley, & others – a dissolution of boundaries that continues into the present. [J.R.]

2020 EDITOR’S NOTE. Above is how I handled the presentation of Catanzano’s work a decade ago, not realizing the strides she would make in the intervening years – most notably through a series of interventions and residencies at major observatories and scientific research centers: among them, CERN (the European Organization for Nuclear Research) in Switzerland, the Cerro Tololo Inter-American Observatory in Chile, and the Simons Center for Geometry and Physics at Stony Brook University. From this came a further outflow of work and the composition of poems and poetics that went beyond metaphor to the investigative urgency of Olson’s dictum from Herodotus: “to find out for oneself … instead of depending on hearsay.”
Accordingly, then, along with her own projects, she is collaborating on literary-scientific projects with scientists at CERN and elsewhere and has prepared a revised and expanded edition of all of her essays, and “essay-poems,” on quantum poetics. These include those first published here between 2009 and 2012, accessible now in an updated edition presented by Poems and Poetics. Her author’s note and opening essay of this edition appear below. [J.R.] 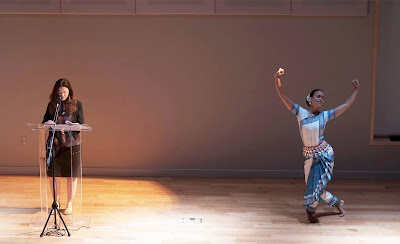 2020 AUTHOR’S NOTE. Since Jerome Rothenberg published my first essays in quantum poetics in Poems and Poetics, I have extended those investigations into an integrated theory-praxis where I develop literary projects in parallel to physics and cosmology, the philosophy of language, and the literary and artistic subcultures of the avant garde. Today, my work in quantum poetics progresses as part of each new project I undertake. While the term, “quantum poetics,” has been invoked by scholars and writers such as Daniel Albright to discuss modernist poets, Stephanie Strickland to discuss digital poetry, and Gwyneth Lewis to discuss poetic form, among others, what distinguishes my use of the phrase is its signification of an integrated literary theory and writing practice that is centered on quantum theory and related physics and informed by my research on cutting-edge science, my funded site visits to scientific research institutes, and my collaborations with scientists in addition to my independent projects.
Quantum poetics occurs within a long literary tradition of poets who have responded to science. My work departs from some of the conventions of this tradition in its speculative focus on the literal in relation to both the structure of matter in physics and the materiality of language in poetics. As a result of this focus, my work in quantum poetics aims to challenge normative notions of language, spacetime, and reality while expanding how modes such as ecopoetics, new materialisms, feminist poetics, ’pataphysics, language writing, conceptual writing, and posthumanism – as well as scientific fields such as particle physics, quantum computing, and astrophysics – are theorized and conducted.
Though the notion of “the quantum” is now recognized as nearly ubiquitous in contemporary fiction and the arts, an issue examined by Robert P. Crease and Alfred Scharff Goldhaber in The Quantum Moment: How Planck, Bohr, Einstein, and Heisenberg Taught Us to Love Uncertainty (2014) and others, and while references to quantum theory occur across social realms, my work in quantum poetics uniquely explores quantum theory and related physics through the literary art form of poetry as well as in poetically expanded subgenres such as investigative poetics, intergenre fiction, transdisciplinary texts, and transmedia literary art. In this multimodal literary practice, I experiment with literary and artistic form, content, methodology, and theory in direct relation to scientific experiments and theories in physics, such as quantum mechanics and quantum computing, relativity, the Standard Model of physics and beyond Standard Model phenomenology, high-energy particle physics, astrophysics, and more.
In addition to my essays and essay-poems in quantum poetics, my independent projects include two published books of poetry that evoke, in part, science and its philosophical dimensions, a published intergenre novella that combines poetry with fiction and uses scientific definitions of spacetime as a literary device, a published poem whose poetic form is based on a model of a topological quantum computer, an exhibited digital poem on wave-particle duality, and poems that explore other aspects of science. My current collaborative projects with scientists include a discussion project on ambiguity in poetry and physics, a proposed hybrid poetry-particle physics experiment, and a computational version of my quantum computer poem that is being developed with artificial intelligence programs and quantum script writing.
The 2020 edition of Quantum Poetics presents my early thinking with revisions and elaborations. I am grateful to Rothenberg for his support of this work, which came about from our participation in a panel on the topic of “wilderness” at Naropa University’s Summer Writing Program. In preliminary discussions, I suggested that the concept of wilderness should include ordinarily invisible environments such as subatomic and cosmological space. He shared his book of poetry, The Book of Concealments (Chax Press, 2004), a follow-up to A Book of Witness: Spells & Gris-Gris (New Directions, 2003), which suppresses the first-person pronoun toward an “intimation…of an imagined world embedded into the real one.” We considered his procedural literary constraint as an expression of dark matter and dark energy, which comprise about 97 percent of the known universe. When I shared my essays in quantum poetics that I had written a year or so before, he offered to publish them in Poems and Poetics. This support motivated me to maximize the creative and scholarly potential of my essays, which led to my development of quantum poetics as a larger critical-creative practice.
Since my intended readership for this work has always been situated across fields to include scientists, writers, artists, and scholars, in addition to enthusiasts of poetry, science, and the arts, I provide accessible information on these fields, which at times may appear common to experts but is necessary to those who are not. [Amy Catanzano]

[The remainder of the poem is missing in this Blogger version but available here.]

Shlain discusses how Picasso and Braque, through cubism, and Einstein, through relativity, imagined that all points in space along a path of observation simultaneously occupy the same location. In his theory of general relativity, Einstein explained how the world might look to someone with access to all perspectives at the same time,[6] collapsing ordinary distinctions between and within time and space. In early cubist art such as Braque’s Pedestal Table (1911), objects can be viewed from multiple angles at the same time, fractured into visual fragments and rearranged so that the viewer does not have to move through space in time in order to view multiple angles of the objects in a linear sequence. While the viewer sees different angles or sides of the object at the same time on the canvas, they remain stationary, reversing a more typical experience with sculpture in three-dimensional space where a viewer must move around an object to see all or most of its angles or sides.[7] In both cubism and relativity, space and time appear relative and inseparable, uniting in a new dimension, the fourth dimension, and leading to a new word for this dimension, “spacetime,” where Euclidian and Aristotelian notions of space and time—those of linearity, sequence, duration, and conventional logic—have no meaning. What Shlain does not acknowledge is that poets have made similar discoveries. In developing and responding to new conceptions of reality, poets create not only words but new units of measurement in novel configurations of language, known as poems: “All clocks are clouds.” “A and Not-A are the same” (Michael Palmer).[8]

[Read “The Multiverse,” the next installment of Catanzano’s Quantum Poetics (2020) on Gertrude Stein and the fourth dimension, the relationship of quantum theory and relativity, string theory and poetic logic, and how poetry can uniquely explore physics, presented by Poems and Poetics here.]