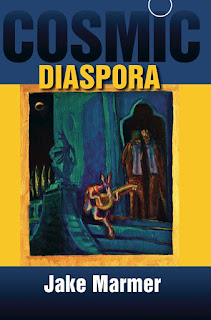 Growing up on the outskirts of the universe—provincial Ukrainian steppes—I was a devout reader of science fiction, in particular that of Eastern European masters, Strugatsky Brothers and Stanislaw Lem. At some point coveted translations of American sci-fi classics started to slide under the curtain. They were all the more otherworldly for their foreignness, for the shadow of another language and culture, which, even without aliens or portals, felt as remote as an extraterrestrial civilization.

After I settled in the U.S., I let go of sci-fi for nearly two decades. Perhaps because “alien”—”resident alien,” “legal alien”—were trigger words for me as an immigrant. Or maybe, sci-fi was just too bound up with my old-country self, which I was trying to erase.

Encountering the work of Samuel Delany, Ursula Le Guin, Octavia Butler, and Sun Ra not only rekindled my interest in the genre but altered my understanding of its possibilities. Rather than imagining a defamiliarized present or the evolution of technology, these artists searched for the deep future of the myth, spirit, and language. They searched for the future of otherness, desire, and the epic.

In these poems you may also find more than a hint of the Talmud, Midrash, and Zohar—texts that allude to alternative realities: some of which exist alongside our own; others, tangled within; and others yet, completely unrelated, made of pure Light or pure Text.

Living in the Silicon Valley for the past four years with self-driving cars, security robots, drones, and remotely operated librarians may have something to do with all of this, too.

wasn’t the light of the unpronounceable name

wasn’t the shadow of another future, burning fingers

but the way the craft

with intimacy so ultimate

it could only be achieved by a machine

she unrolled every time

the noise dropped for 8

seconds, when she was utterly alone

and as all space settlers

into a diaspora of atoms that know nothing

of each other’s existence

before coming together again

without any objective guarantee

Testimony In Regard to The Vast Foam-like Umbrella

some call it theological equivalent of money laundering

I take issue with that—

and as a member of clergy I am entitled to—

pulsates with its scraped horizons, circularity of obsession

I am standing, alone, with the tightest optical strain known to man

and you want me to—bless your—?

gematria equivalent of your soul’s worth

as a donation, as a joke, and chopped it, and rolled the color’s distance—

before I knew it, the thing

starts nipping at the non-representation

if anything, it was—numinous fundraising—

so when the beam gave out

at sunrise, I was barely surprised

“there’s no need for it, really,” I said, three times,

as is the custom

was already at the bath-house, dunking

just because you are being extrapolated

doesn’t mean you can’t be having a ball

not a telescope but a phantom limb

stretching towards the invisible—

is how the experiment’s outcome

was described to me; my consciousness, a small

price for this new form of travel

I was told I’d have to become

a mythic being with no eyes

in the garments that are not

when I woke up blind and wanting

it was not my hand that reached across

cosmos to the stars we so wanted to see towards

the outside we were so desperate to find—

instead, their hands went into my corpus

my memory bled unto their fingertips

I could speak no words but laced

their echoes, in patience & sorrow

in the beginning, a burning mirror to erase

the dream of semblance, created

the dream of the missing alef,

which became the breath

of Elohim, the edge

of your song’s void

I lost loads of time

pills in the ship’s abdomen—

we called it “the library”

until one evening, in the back

of a bar on a desolate, backwater moon

I was introduced to methods

and felt cosmos not beer

“consciousness,” I called to the librarian,

“consciousness is a ritual,

is a contracting theater

performed by my own hands

alef is for the alien

bet for the great

vet for the inevitable

gimmel is the game-plan:

daled, face it: you got dealt

ancestral language you don’t even speak

Angel Vav / Flea in my heart”

zayin and rules of creation

over your big alien ears

tet is taking alien to bed

kaf the cup of alienation—runneth over, lookout

ayin for all you got your myopic Cyclops alien eyes on

tzadi whichever side you’re on, a thorn in

kof is cough, all aliens got it

giveaways of an alien

shin is for wake-up kick

tav for the vat

of drek & pride may we all rise from

[N.B. Cosmic Diaspora, Jake Marmer’s third collection of poems, is now available from Station Hill Press at http://www.stationhill.org/books/all/cosmic-diaspora/.  The press’s summary reads as follows: “Cosmic Diaspora …  brings together fantasy, hard-boiled sci-fi, Jewish mysticism, experimental poetics, free jazz, and dark, deadpan humor. Born in the wild steppes of Ukraine, Marmer brings his immigrant experience into a cosmic, diasporic disorientation and attempts to imagine the deep future of myth, spirit, and language. In Cosmic Diaspora, you may also find more than hints of the Talmud, Midrash, and Zohar that allude to alternative realities, some of which exist alongside our own, while others are tangled within it—or are completely unrelated, made of pure Light or pure Text.”

Posted by Jerome Rothenberg at 6:53 AM