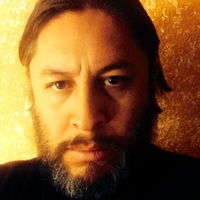 [The essay by Yépez following the translation, below, of Jean Louis Battre’s Portuguese poem, “The Cave,” is re-posted here as a tribute & acknowledgement of the work & thought of Mexican poet Heriberto Yépez in the development of a future-facing ethnopoetics from a perspective outside the familiar U.S. nexus.  It was originally published in the radical magazine R.A.U.L. / Red Anarcho Utopista Libre in May 2012, and a related work by Yépez, “Ethnopoetics. What Is It?” appeared earlier in Poems and Poetics.]

This is the cave, when the cave is denied us / These pages are the walls of the old cave again between us / The new old cave / Ancient in its primordiality / in its essential sense / there where our ancestors sat around the fire / Here those who pass are in the verses of others / my verses are yours / yours mine / my selves yours / here we are all others / and others are not alone / others are us / we are brotherhood / humanity / we pass / reading others in ourselves / and each one who passes by leaves / this desire to not die / to follow / to touch / to communicate / we are alone among ourselves / the word is the search for meaning / search for the other / search of the brother / search for something beyond / perhaps a god / the search for love / the search for nothing and everything / any search whatsoever or just the way / what can we offer to each other but our own, aloof self? / what to offer besides our not knowing? / our loneliness? / we are alone in silence, but not in the cave / each one who passes by paints the wall of this cave with its symbols / like the doors of a metaphysical bathroom / this blog is a metaphor of the cave again between us / a bathroom door / where each other / in his crowd solitude / inscribes pieces of soul in the form of anything / verses / drawings / photos / art / literature / anti-literature / deregulation / inventing / reversing reversal around the world within solitary reverse verses of themselves / soul photographs / leave your souls here / at the end of these sentences I will have died a little / but as the poet would say, no one is the father of a poem without dying before
Jean Louis Battre, 2010

A SKETCH ON GLOBALIZATION & ETHNOPOETICS

Ethnopoetics as: thinking about the risks of building an International
(paranational) Poetics, when such enterprise could
become a tool to make global homogenization easier.

Ethnopoetics as: keeping away from the danger of conceiving the
“Past” as another opportunity to extend our extreme
consumerism even to where-when we couldn’t.

Ethnopoetics cannot become the intellectual branch of
the Retro spirit.

Ethnopoetics as: the challenge to acquire a glocal
point of view without falling in LiteraTourism.

Ethnopoetics as: the thinking of the language practices of the “Third
World”, the “Primitive” and the “Marginal-Alternative”.

Ethnopoetics as: the thinking of our categories as something we inherited and so, something we always need to put into quotation marks (denaturalize language).

Ethnopoetics as: an on-going revision of the past through the point of
the present (J. Rothenberg).

Ethnopoetics as: the serious development of an imaginary
contemporary ficto-ethnopoetics (A. Schwerner, S.
Sarduy, M. Bellatin).

Ethnopoetics as: escaping the temptation of looking outside “Western”
literature or the “Mainstream” simply because “our” own
practices have become exhausted, boring or less
attractive.

Ethnopoetics as: preventing that “our/their” practices are not misused
by the “West” simply because the “West” is exhausted,
bored or in market-driven-decay.

Ethnopoetics as: criticism against the use of other-poetic-practices as
a resource to revitalize a dominant (but tired) tradition.
As if poetics from other cultures could be used in the
same pattern as oil or any “natural” or “cultural”
resource from other cultures used for its own good.

Ethnopoetics as: helping to make traditions maintain a real diversity,
with or without the building of common ground (axis).

Ethnopoetics as: the belief that traditions around the world must be
different, polar, or even incompatible.

Ethnopoetics as: politics referring to the conservation of “nature” or
“city” that made/makes possible the existence of
specific poetics practices in certain communities.

Ethnopoetics as: politics referring to the conservation of the languages
that make possible the existence of specific poetic
practices in certain communities.

Ethnopoetics as: the impossibility of dividing general poetics from
specific politics.

Ethnopoetics as: a reflection on the concept of hybridization, cross-
breeding, etc. in the areas related to languages and
language in general (in general?)

Ethnopoetics as: the study of the poetic practices of “minorities” by
“mayorities”.

Ethnopoetics as: the study of the poetics practices of “majorities” by
“minorities”.

Ethnopoetics as: The End of “Orientalism” (Edward Said).

Ethnopoetics as: a radical critique of any attempt to “understand”
(dominate?) the discourse and works of other cultures
without building an effective dialogue in which the
“others” can directly reply to interpretations.

Ethnopoetics as: a study and experimentation of individual or
communal language-combinations such as Frenglish,
Portunhol, Spanglish, etc or the presence of various
languages in a poetic space.

Ethnopoetics as: the study of the combination of several cultures that
“share” “one” language, or use traditionally separated
strata from that “one” language, resulting in a cross-
cultural (ethnopoetic) work “without” having to go
“outside” “one” “culture” (i.e, the work of José Kozer as
using the different Spanish languages around Spain, the
U.S. and Latin America, or the use of different
levels/vocabularies/social classes of English by Bruce
Andrews in the U.S.).

Ethnopoetics as: an exercise of using other (cultures-)languages
(away from Mother Tongue) as an alternative to
becoming “Translated” or “Translating”.

Ethnopoetics as: the study of the shifts in cultural paradigms on the
poetic subject since the explorations of contemporary
ethnopoetics (from the poet as “shaman” to “rockstar”
to “D.J.”).

Ethnopoetics as: a strategy to leave behind “ethnopoetics” as a curious
branch (60’s related) of literature and make it
inseparable from poetics, until the term is useless for being
so obvious and fancy.

Ethnopoetics as: the analysis of the international/global/intercultural
field opened by technology.

Ethnopoetics as: a radical exploration of the Internet as an experiment
on ethnopoetics.

Ethnopoetics as: an experiment away from paragraph & line. If
ethnopoetics has deepened the exploration of orality,
the pictoric, other-forms-of-writing, non-page-formats,
etc, as available resources for our own purposes, it’s
necessary to see all those explorations as a first stage
to finally leave paragraph and line behind.

Ethnopoetics as: “ethno” as the permanent prefix of every poetics.
“Ethnopoetics” not just applying to the poetics of the
“Other”.

Ethnopoetics as: the radical search beyond the end of translation.


Posted by Jerome Rothenberg at 5:35 AM