To commemorate the fiftieth year today since the death of the essential poet & dear friend Paul Blackburn, I’m posting the following memorial & tribute by Jackson Mac Low, which will also appear in the new Book of the Americas, co-edited by Javier Taboada and me. 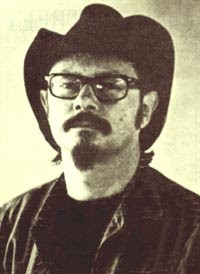 Let me choose the kinds of light

to light the passing of my friend

A pale light like that of a winter dawn

is not enough to guide him in his passing

but enough for us to see

how he showed himself to us

when he made us think he was recovering

arrested in his esophagus

had already spread to his bones

How he led us on

I spent so little time with him

thinking he'd be with us now

stains my memories of our days

at the poetry festival in Allendale Michigan

How many times I hurried elsewhere

rather than spending time with him

in his room 3 doors from me

I will regret it the rest of my life

I must learn to live

dwelling on the moments

in July as in years before

tho amber light dims to umber

& I can hardly see

I see Paul standing in the umber light

cast on his existence

by his knowing that his death was fast approaching

reading in the little auditorium

careful of his timing

anxious not to take

filling our hearts with rejoicing

doing the work he was here for

seemingly among us now

I for one was fooled

thinking he was winning the battle

so I wept that night for joy

As I embraced him after he read

I shook with relief & love

I was so happy to hear you read again

If there were a kind of black light

that suddenly cd reveal to us

what wd I have seen that night

as I embraced you

with tears of joy

I keep remembering the bolt of lightning

that slashed the sky at twilight

over the Gulf of St. Lawrence

& turned an enchanted walk with Bici

thru mossy woods nearly to its mouth

to a boot-filling scramble up thru thorn bush & spruce tangle

Beatrice guided me & I was safe

at the end of August on Cape Breton Island

but when Jerry telephoned me of your death

the lightning that destroyed

the illusion you were safe

not to friendly car light

but the black light of absence

but revelatory light that is no light

the unending light of the realization

that no light will ever light your bodily presence again

Now your poems' light is all

The unending light of your presence

in the living light of your voice

Posted by Jerome Rothenberg at 4:27 PM