Translation from Spanish by Cole Heinowitz 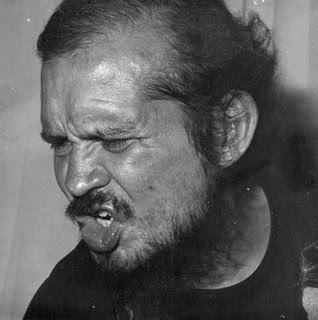 To the Memory of  Infraín


1
Some grubby pants & death in the chest
Right on man!
I’ll see you there by the wall
/ just past the loading zone /
winds crystallizing on the left
fins of the dust : your fins
1 oasis harpooning the dryness in us
In the daughter of your eye / the graveyard
: Mezcalito casting posies :
Earth & its opposite : deer silent as the noises at their weddings
You shouldn’t go / but you should go


We’re poets
Cymbals of the black sun
that magnetizes us


3
Neither lumpens nor proletarians
The wage-earning demigod
not 1 pen bursts in our abysses
: The infra-dawns in the spider’s House of Usher :
Sweet clitoris plays paddle ball / embarks as for the 5 mountains in 2
lutes
At tender gallop & flowing mane
Rubayat is in love
with
Ramayana


4
Our tongue has been barbed
It’s watermelon / dripping deep-laughing vagrant
Adventure that’s torn open our abrasions
What we’ve been we are in the crescendoing of echoes
For such shoulders : such thighs
For those ankles / those steps
Lessons of cleansing by the scalpel


6
The fight? / Against the power of phara$aical $ign$
(Mask vs Longhair)
10 years later we’re still being tribal
/ lubricous wherever /
In : : : : :
Glen & Canyon
Dogs inhabited by voices of the desert
Aztec priests blinded by the flame by the song of the body
& the flame of the body that’s the song
Reality sandwiches!


7
The compost of language doesn’t germinate
if it isn’t in deeds already poverty incarnate
The Marabu triumph in Nahuatl lands
—How much for the singing rabbit? / With wings?
—Happy Un-Birthday
Infrarealism isn’t some scouring-word
Our nights have anthologized us
Every texticle in its place / that could likely be our nomad’s miracle


8
It’s Zero Hour again
Jesús Luis scratches Songs for Thugs in its light
There are stars like there are desires
there are abysses & there are roads
The piranhas of the day before yesterday
are iguanas of the future
Waves : waves : waves of thirst


9
—What’d those tv employees say about us?
/ sons of the happy service & prosperous benefits /
—Oh Holy Satanic Laughter
—Billy Burroughs doesn’t even know?
The lowlife jumps for joy
/ They’re fireflies in the dawn /
—Would that be 1 Sirian haiku?
1 water poet in the sierras?
Delirium’s orgasm?


11
I touch wind
: turgid chance :
Our root’s talking
/ not the laundering of Power & its ticket-booths
its taxes : its punishments : cynical grins : its wheezing of vanities /


12
Let Tin-Tan burn his zoot suit
The roads are full of other beings
/ not the cubicle or charge /
Remember body how much you lived
How much gospel of the open heavens
/ Subterraneously : sovereignly /
Because it won’t be the fear of any fear
that makes us set at half mast
the igneous geyser of our indignation

[translator’s note.  In 1975, the Mexican poet Mario Santiago Papasquiaro (1953-1998) and Roberto Bolaño co-founded Infrarrealism, a poetry movement that drew inspiration from Dadaism, Surrealism, Stridentism, the Beats, and the contemporary Peruvian movement Hora Zero. Their project, at its core, was to explode literary, social, and political conventions through a radical reconception of the poetic imagination and the poetic life. As Bolaño put it in the “Infrarrealist Manifesto:” “The true imagination is the one that dynamites, elucidates, injects emerald microbes into other imaginations…Perception opens by way of an ethic-aesthetic taken to the extreme.” Bolaño’s novels (especially The Savage Detectives, in which appears as Ulises Lima) are now well known in the and stand as a profound testament to the extraordinary daring and energy of Infrarrealism. But ’s large and astonishingly powerful body of work has yet to receive the recognition it deserves outside the Spanish-speaking world. To date, only ’s first major poem, Consejos de 1 discípulo de Marx a 1 fanático de Heidegger (1975), has been translated into English. The poem presented here, “Already Far from the Road,” was originally published in the collection Beso eterno (Al Este del paraíso, 1995), and gives English readers their first taste of Santiago’s later work.  -- Cole Heinowitz]
Posted by Jerome Rothenberg at 6:14 AM

Just discovered and bought a translation of Advice from 1 Disciple of Marx To 1 Heidegger Fanatic and fell in love with this most passionate poet. Then I discovered your blog, which I didn't know existed. Well, I am a returning fan, having encountered you in Stevens Point, Wisconsin years ago. Now here. You should ask to see my poems, as I think you'd like them.
Chuck Goldman a k a D Sadisco